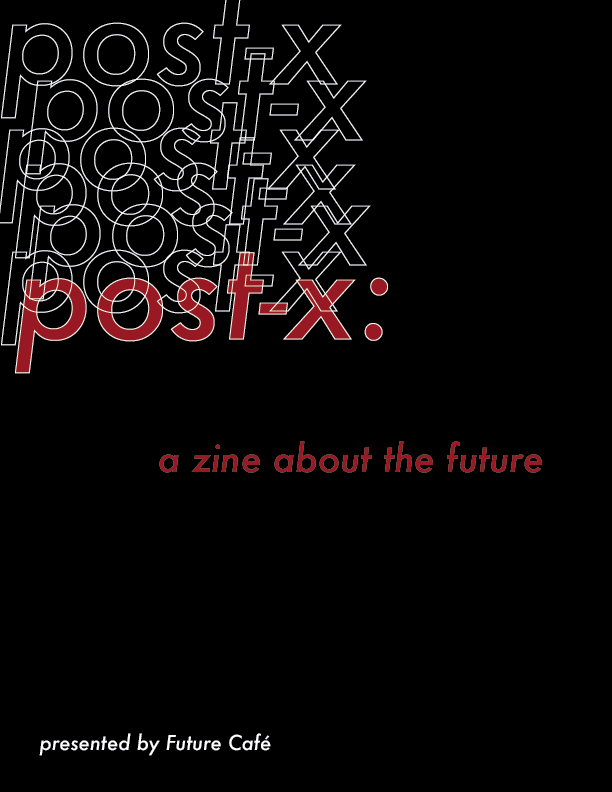 Hey what? If you’re introducing a new zine in 2020, and you were mesmerized by the zine culture (the subcultures) of the 90s, then you gotta be pretty riveted by the persistence of this DIY medium, intrigued by the still-vitalizing impact of that o-so-low-tech imaginary, impressed by the will to constitute some other public (in a nation state where no notion of a public sphere makes sense). More to the point: Post-X is animated by a recognition that, even in the midst of contemporary crises that grow more critical by the day, the distant future deserves attention. Not the coherence of the imagined utopian enclave, but small thought experiments, creative gestures, faint yet fascinating handholds.

Post-X is being launched by the Future Café, an ongoing conversation among University of Chicago College students that has engaged a great range of topics (Health, Cybernetics, Sex, etc.) asking only that participants speculate intensely, sharing their ideas of how the far future might look, might feel, might taste. It was the archaeologist Shannon Dawdy, my collaborator on the “Materializing the Future” project within the Chicago Center for Contemporary Theory (3CT), who originally energized the Future Café. She was convinced (and quickly convinced me) that those students who “are the future” should be offered a forum within which to speculate collectively, and wildly, about it.

Given that the medium of the zine was once known as the fanzine, part of mid-century sci-fi fan culture, you could say that the zine began, in the past, by zeroing in on the future. These days, within the world of science fiction, it is Afrofuturism that has made the most powerful commitment to imagining a future that is not mired in, or crippled by, the present—no matter how dire that present has become. Post-X is a promise. A promise to welcome and to publish off-beat insights. Post-X is a provocation.  Committed to bringing the energy of the Café to a broader public, the inspiring editors insist that imagining radical futures is a responsibility that you have—that we have—right now.