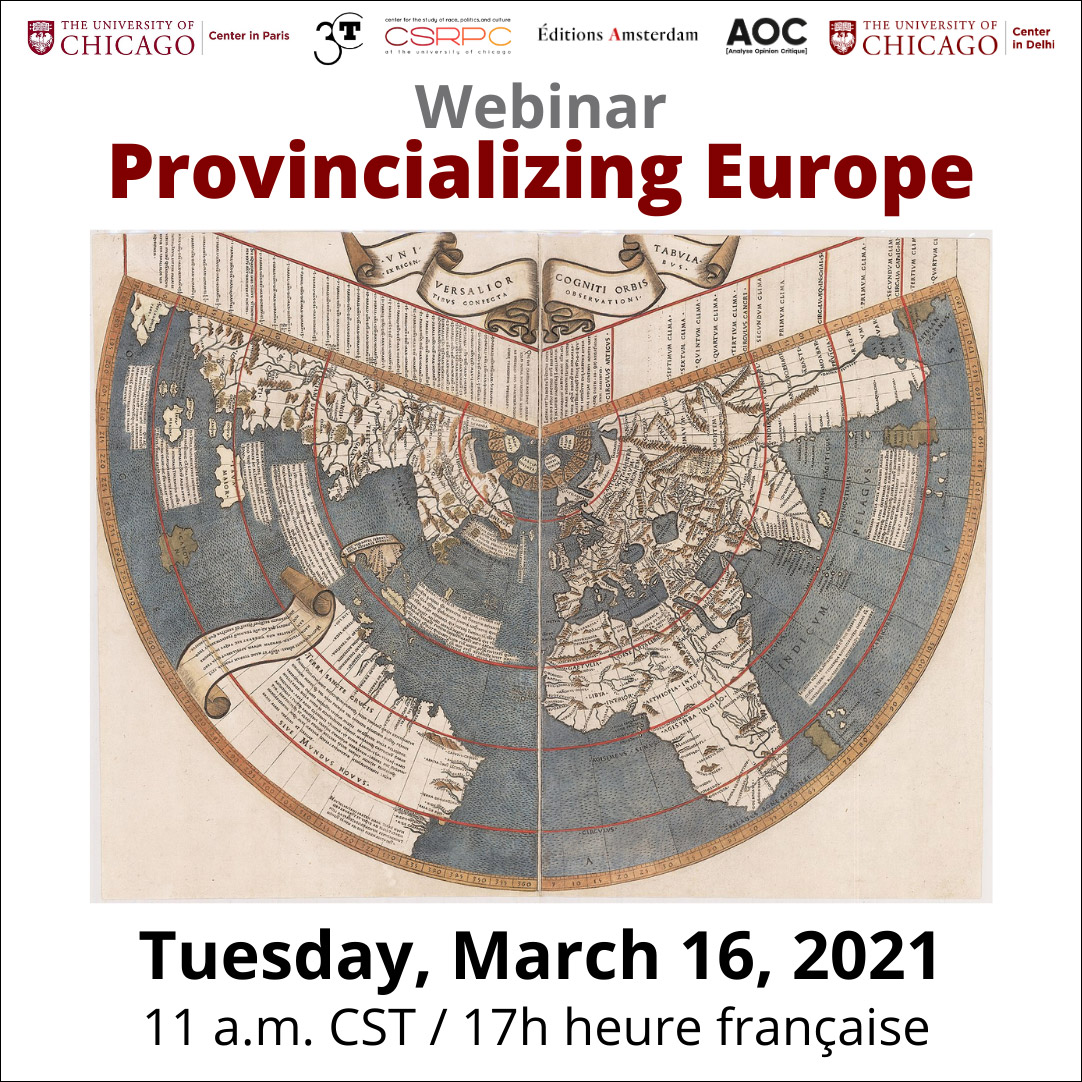 Please join us for a webinar commemorating the 20th anniversary of the publication of Dipesh Chakrabarty’s path-breaking Provincializing Europe and the reissue of its French translation by the Editions Amsterdam.

The webinar will be moderated by Sylvain Bourmeau, journalist at France Culture and director of the online media AOC (Analyse, Opinion, Critique).

Dipesh Chakrabarty is the Lawrence A. Kimpton Distinguished Service Professor in History at the University of Chicago and one of the leading experts in postcolonial theory and subaltern studies. He is a 3CT fellow.

Thomas Brisson is Professor of Political Science at the Université de Paris 8 Vincennes-Saint Denis. His work has focused on the creation of transnational intellectual relations between the West and the former imperial worlds. Thomas Brisson is the author of the new preface written for the reissue of the French translation of Provincializing Europe by the Editions Amsterdam (2020).

Ewa Domanska is Professor of the Human Sciences at the Department of History, Adam Mickiewicz University in Poznan, Poland and recurrent Visiting Professor in the Department of Anthropology/Archaeology Center, Stanford University. Her teaching and research interests include the comparative theory of human and social sciences and the history and theory of historiography.

Achille Mbembe is Professor at the Wits Institute for Social and Economic Research (WISER) at the University of Witwatersrand in Johannesburg, South Africa, and is annual Visiting Professor at the Franklin Humanities Institute at Duke University. A co-founder of Les Ateliers de la pensée de Dakar and a major figure in the emergence of a new wave of French critical theory, he has written extensively on contemporary politics, philosophy and postcolonialism.

José Neves is Assistant Professor in the Department of History at the Universidade Nova de Lisboa. His research areas include Cultural History, History of Political Thought and Social Movements, Historiography and Theory of History. He just coedited with Marcos Cardao a special issue entitled “Provincializing Europe – 20th anniversary,” in the journal Praticas da Historia, n°11, 2020.

Lisa Wedeen is the Mary R. Morton Professor of Political Science and co-director of the Chicago Center for Contemporary Theory at the University of Chicago. Her teaching and research interests include comparative politics, the Middle East, political theory, and feminist theory.