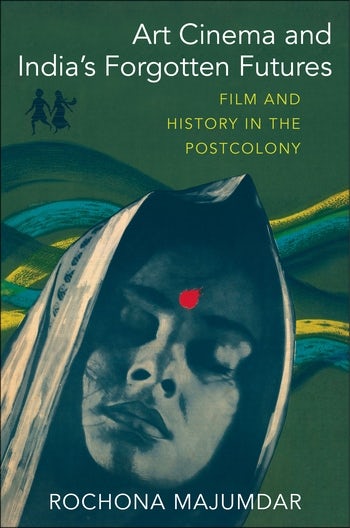 This is a hybrid event, and registration via the link above is required for both in-person and virtual participation.

The project of Indian art cinema began in the years following independence in 1947, at once evoking the global reach of the term “art film” and speaking to the aspirations of the new nation-state. In this pioneering book, Rochona Majumdar examines key works of Indian art cinema to demonstrate how film emerged as a mode of doing history and that, in so doing, it anticipated some of the most influential insights of postcolonial thought.

Majumdar details how filmmakers as well as a host of film societies and publications sought to foster a new cinematic culture for the new nation, fueled by enthusiasm for a future of progress and development. Good films would help make good citizens: art cinema would not only earn global prestige but also shape discerning individuals capable of exercising aesthetic and political judgment. During the 1960s, however, Satyajit Ray, Mrinal Sen, and Ritwik Ghatak—the leading figures of Indian art cinema—became disillusioned with the belief that film was integral to national development. Instead, Majumdar contends, their works captured the unresolvable contradictions of the postcolonial present, which pointed toward possible, yet unrealized futures.

Analyzing the films of Ray, Sen, and Ghatak, and working through previously unexplored archives of film society publications, Majumdar offers a radical reinterpretation of Indian film history. Art Cinema and India’s Forgotten Futures offers sweeping new insights into film’s relationship with the postcolonial condition and its role in decolonial imaginations of the future.

Rochona Majumdar is Associate Professor of South Asian Languages and Civilizations & Cinema and Media Studies, as well as a 3CT fellow, at the University of Chicago. She is a historian of modern India whose interests span histories of Indian cinema, gender and marriage in colonial India, and Indian intellectual thought in the nineteenth and twentieth centuries. She also writes regularly on postcolonial theory and historiography and on the intellectual history of key concepts in colonial Bengal during nineteenth and twentieth centuries.

Salomé Aguilera Skvirsky is Associate Professor in the Department of Cinema and Media Studies and the College, and Affiliated Faculty of the Center for Latin American Studies and the Center for the Study of Race, Politics, and Culture. Skvirsky works on transnational political cinema, with a special focus paid to Latin America. She takes a comparativist and broadly hemispheric approach to the representation of race, labor, and “the people” in moving image media. Her first book, The Process Genre: Cinema and the Aesthetic of Labor, was published by Duke University Press in 2020.

Lisa Wedeen is the Mary R. Morton Professor of Political Science and co-director of the Chicago Center for Contemporary Theory at the University of Chicago. Her teaching and research interests include comparative politics, the Middle East, political theory, and feminist theory. Her most recent book, Authoritarian Apprehensions: Ideology, Judgment, and Mourning in Syria (2019), received in 2020 the American Political Science Association’s Charles Taylor Book Award, sponsored by the Interpretative Methodologies and Methods group, and the APSA’s inaugural Middle East and North Africa Politics Section’s best book award.

Jennifer Wild, on leave from the University of Chicago (AY 21-22), is Visiting Associate Professor in the Departments of Cinema and Media Studies and French and Italian at the University of Southern California. Wild’s research and teaching focuses on the history and theory of modernism and the avant-garde; French visual and cultural history; and feminist and political aesthetics. She is the author of The Parisian Avant-Garde in the Age of Cinema, 1900-1923 (University of California Press, 2015), and is currently completing a second book titled, Radical Recognition. This work examines the political, ethical, and aesthetic stakes of the film and photographic image in the history of French politics and modernism between 1871, or the event of the Paris Commune, and the contemporary moment.

Tyler Williams teaches courses on Hindi language and literature, South Asian literary and intellectual history, and aesthetic thought at the University of Chicago. In addition to Hindi, his research and teaching touch upon Sanskrit, Persian, and Urdu languages and literatures. His research addresses questions regarding book history, media, literacy, and orality in South Asia. His upcoming book with Columbia University Press is titled ‘If all the world were paper’: A History of Writing in Hindi, and explores the origins and consequences of writing in the premodern Indian vernacular.

This event is organized by 3CT and co-sponsored by Columbia University Press, the Seminary Co-op Bookstores, the Department of Cinema and Media Studies, and the Center for the Study of Race, Politics, and Culture.