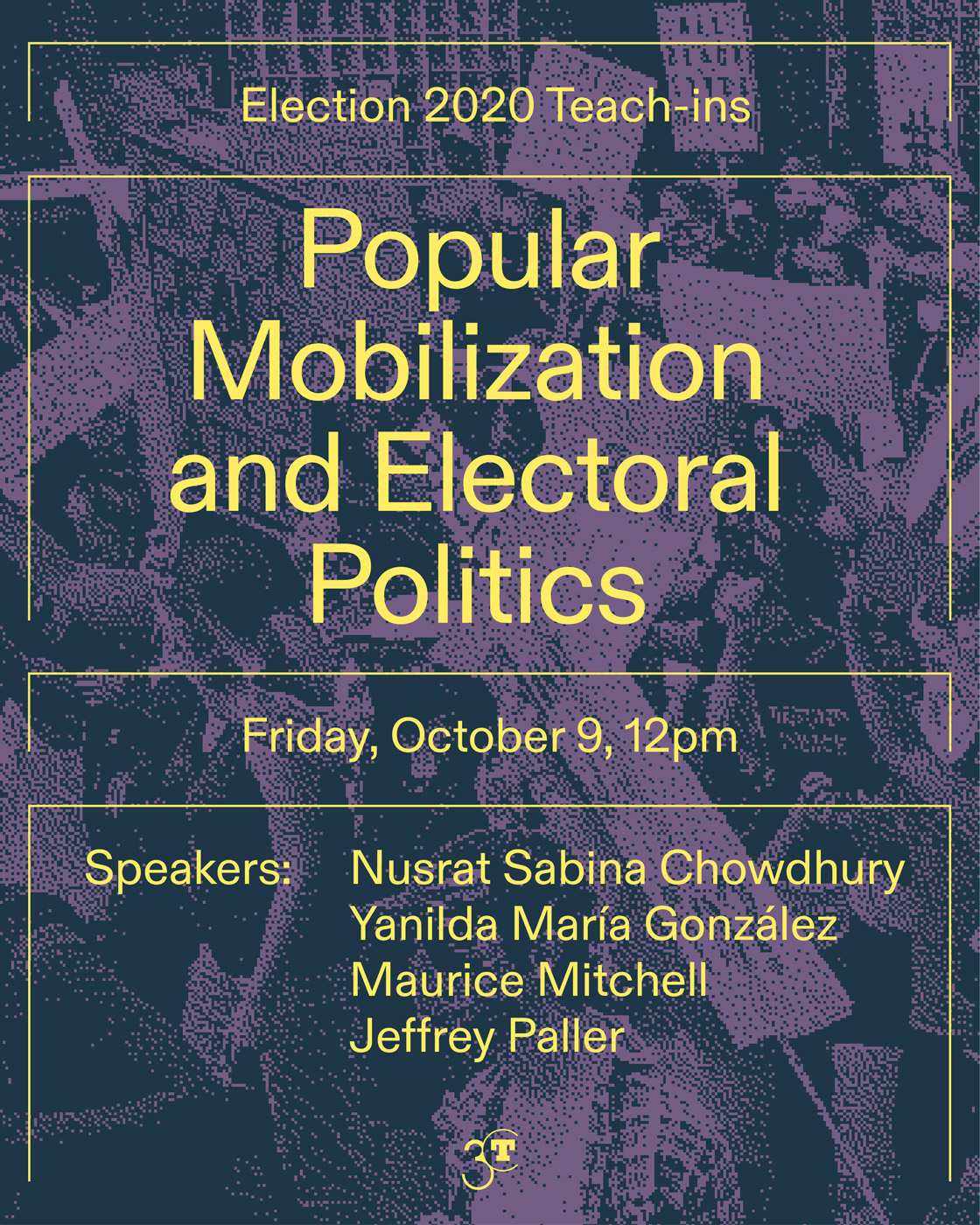 Over the summer of 2020, the United States saw the largest protest mobilizations after the police murder of George Floyd. Given the impending elections, pundits soon sought to predict what the effects of the uprising would be on the 2020 General Election. This panel takes a comparative and historically informed approach to the question of the relationship between protest politics and elections. Thinking the US alongside contexts in Africa, South Asia and Latin America, panelists will consider the various ways in which electoral politics has spurred wider popular mobilization and explore whether and how demands on the streets are incorporated into electoral frameworks.

This is the first in a series of three virtual teach-ins that consider questions of democratic representation and participation as we approach—and then reflect on—the US elections in November 2020. These events present local, national, and global perspectives in an effort to foster conversations that go beyond punditry in critiquing and responding to the current moment.

Nusrat Sabina Chowdhury is Associate Professor of Anthropology at Amherst College. She studies and teaches on topics such as protest, popular sovereignty, and political communication. Her first book, Paradoxes of the Popular: Crowd Politics in Bangladesh (Stanford University Press, 2019), is an anthropology of crowds, a permanent fixture in South Asian democratic life. Her current book project explores the concept of sacrifice in relation to development megaprojects in Bangladesh by looking closely into the role and the ruse of language – of rumor, policies, politics, and international law. This new work is situated within a wider field of the philosophy of postcolonial development.

Yanilda María González is an Assistant Professor of Public Policy at the Harvard Kennedy School. Her research focuses on policing, state violence, and citizenship in democracy, examining how race, class, and other forms of inequality shape these processes. González’s forthcoming book, Authoritarian Police in Democracy: Contested Security in Latin America (Cambridge University Press), studies the persistence of police forces as authoritarian enclaves in otherwise democratic states, demonstrating how ordinary democratic politics in unequal societies can both reproduce authoritarian policing and bring about rare moments of expansive reforms. González received her PhD in Politics and Social Policy from Princeton University. Prior to joining HKS she was an Assistant Professor at the School of Social Service Administration at the University of Chicago. González previously worked at a number of human rights organizations in the US and Argentina, including the New York Civil Liberties Union, ANDHES, and Equipo Latinoaméricano de Justicia y Género.

Maurice Mitchell is a nationally-recognized social movement strategist, a visionary leader in the Movement for Black Lives, and a community organizer for racial, social, and economic justice. Born and raised in New York to Caribbean working-class parents, Maurice began organizing as a teenager—and never stopped. As a high school student, Maurice served as a student leader for the Long Island Student Coalition for Peace and Justice. At Howard University, after a classmate was killed by police officers, Maurice led organizing efforts against police brutality and for divestment from private prisons. Maurice went on to work as an organizer for the Long Island Progressive Coalition, downstate organizing director for Citizen Action of NY, and Director of the NY State Civic Engagement Table. Two tragedies changed the course of Maurice’s life. In 2012, Hurricane Sandy destroyed Maurice’s house in Long Beach, NY and left him living in hotels for months. Eighteen months later, after Mike Brown was killed by police in Missouri, Maurice relocated to Ferguson to support organizations on the ground. Seeing the need for an anchor organization to provide strategic support and guidance to Movement for Black Lives activists across the country, Maurice co-founded and managed Blackbird. Maurice was a key organizer of the Movement for Black Lives convention in Cleveland in 2015. In 2018, Maurice took the helm of the Working Families Party as National Director where he is applying his passion and experience to make WFP the political home for a multi-racial working class movement.

Jeffrey Paller (Assistant Professor of Politics, University of San Francisco) specializes in African politics and sustainable urban development, and his research examines the practice of democracy and accountability in urban Africa. He has conducted fieldwork in Ghana, Kenya, Uganda, and South Africa. He recently published the book Democracy in Ghana: Everyday Politics in Urban Africa (Cambridge UP, 2019). His new project examines the contentious politics of African urbanization. He has received funding from the Social Science Research Council, National Science Foundation, and the University of Wisconsin. His work is published in Polity, Comparative Politics, African Studies Review, Journal of Modern African Studies, Africa Spectrum, and Africa Today.

This event is free and open to all; registration is required. Please email us if you require any accommodations to enable your full participation.