Election 2020 Teach-in: Beyond the Electoral Moment 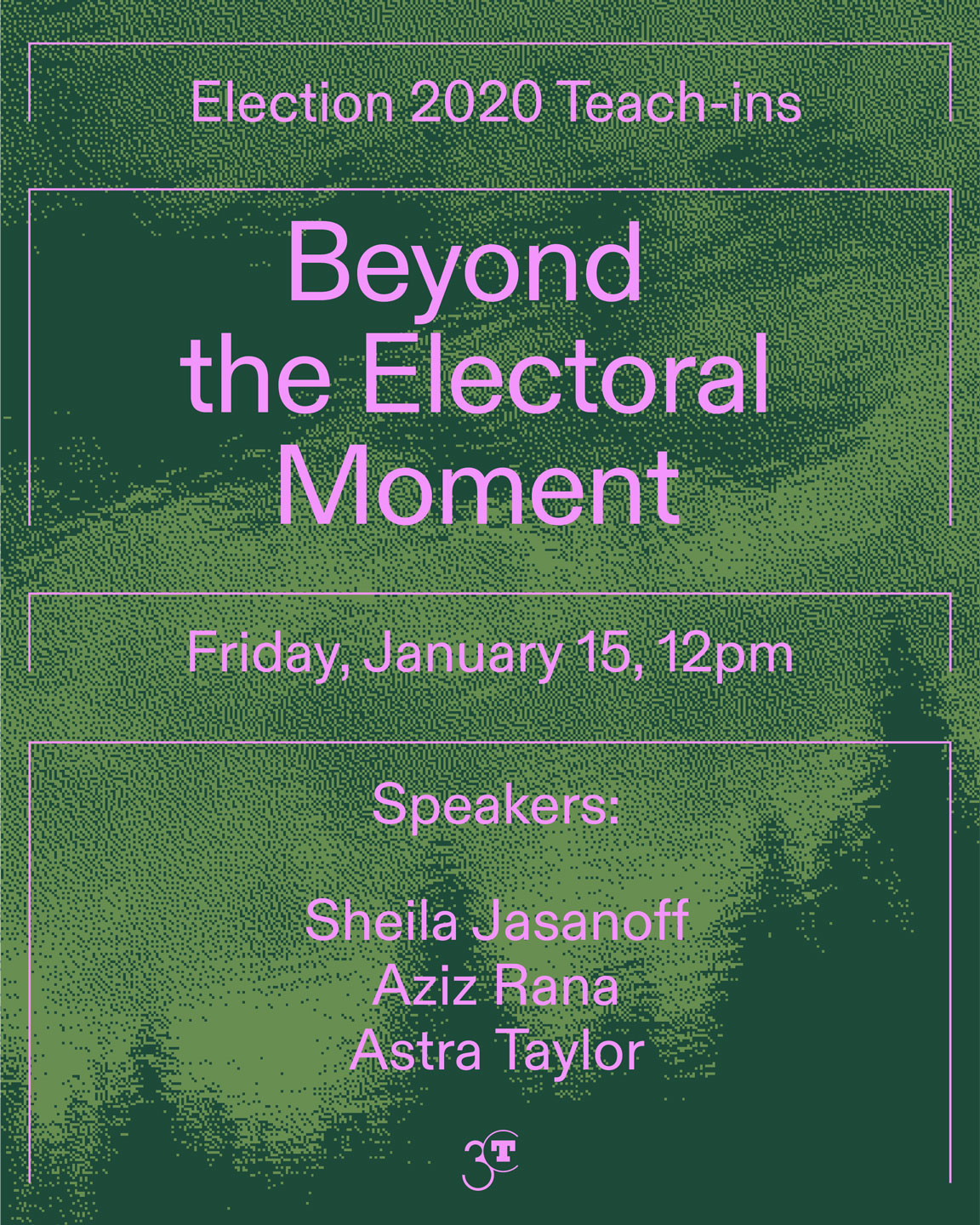 This panel will return us “full circle” to our opening panel. With some sense of the political landscape in the United States going forward, we ask what next? Panelists will resituate elections within a broader ecosystem and horizon of politics, thinking especially about the relationships between electoral politics and social movements.

This is the third in a series of three virtual teach-ins that consider questions of democratic representation and participation as we approach—and then reflect on—the US elections in November 2020. These events present local, national, and global perspectives in an effort to foster conversations that go beyond punditry in critiquing and responding to the current moment.

Sheila Jasanoff is Pforzheimer Professor of Science and Technology Studies at the Harvard Kennedy School. A pioneer in her field, she has authored more than 130 articles and chapters and is author or editor of more than 15 books, including The Fifth Branch, Science at the Bar, Designs on Nature, The Ethics of Invention, and Can Science Make Sense of Life? Her work explores the role of science and technology in the law, politics, and policy of modern democracies. She founded and directs the STS Program at Harvard; previously, she was founding chair of the STS Department at Cornell. She has held distinguished visiting appointments at leading universities in Europe, Asia, Australia, and the US. Jasanoff served on the AAAS Board of Directors and as President of the Society for Social Studies of Science. She is a member of the Council on Foreign Relations. Her honors include the SSRC’s Hirschman prize, the Humboldt Foundation’s Reimar-Lüst award, a Guggenheim Fellowship, an Ehrenkreuz from the Government of Austria, and foreign memberships in the British Academy and the Royal Danish Academy. She holds AB, JD, and PhD degrees from Harvard, and honorary doctorates from the Universities of Twente and Liège.

Aziz Rana is the Richard and Lois Cole Professor of Law at Cornell Law School. His research and teaching center on American constitutional law and political development, with a particular focus on how shifting notions of race, citizenship, and empire have shaped legal and political identity since the founding. His book, The Two Faces of American Freedom (Harvard University Press), situates the American experience within the global history of colonialism, examining the intertwined relationship in American constitutional practice between internal accounts of freedom and external projects of power and expansion. His current book manuscript explores the modern rise of constitutional veneration in the twentieth century—especially against the backdrop of growing American global authority—and how veneration has influenced the boundaries of popular politics. He has also written essays and op-eds for such venues as n+1, The Boston Review, Dissent, The New Labor Forum, The Guardian, Jacobin, The Chronicle of Higher Education, The Nation, The New York Times, Jadaliyya, and Salon.

Astra Taylor is a filmmaker, writer, and political organizer. She is the director of the philosophical documentaries What Is Democracy?, Examined Life, and Zizek!; the author of the American Book Award winner The People’s Platform: Taking Back Power and Culture in the Digital Age and Democracy May Not Exist, but We’ll Miss It When It’s Gone; and a co-founder of the Debt Collective. She is a co-author of Can’t Pay, Won’t Pay: The Case for Economic Disobedience and Debt Abolition, out now from Haymarket Books.