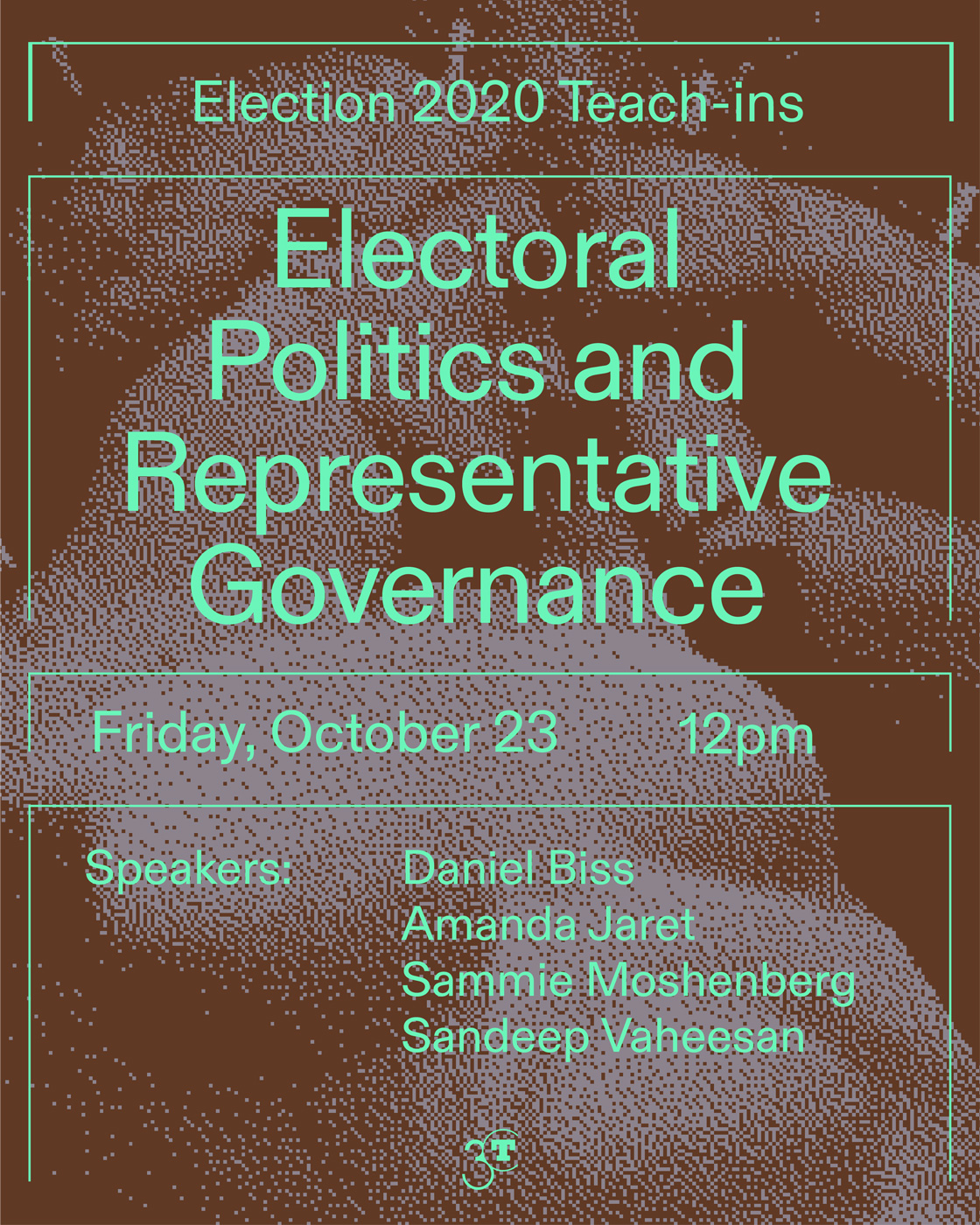 Our first teach-in focused on the relationship between popular mobilization and electoral politics. In this second teach-in, we will consider the stakes of the elections for institutions of democratic governance. Through a consideration of a range of institutional sites – political parties, the judiciary, corporations and unions – panelists will consider the ways in which these elections might open up or constrain representative possibilities. How do we think about institutional resilience in the face of emergent authoritarian tendencies? What would institutional revitalization require or look like? How do institutions have to be reimagined for progressive aspirations to translate into transformative policy?

This is the second in a series of three virtual teach-ins that consider questions of democratic representation and participation as we approach—and then reflect on—the US elections in November 2020. These events present local, national, and global perspectives in an effort to foster conversations that go beyond punditry in critiquing and responding to the current moment.

Daniel Biss began his career as a mathematics professor at the University of Chicago before becoming an organizer and then elected official. He served as a member of the Illinois House and Illinois Senate and ran an insurgent grassroots campaign for the Democratic nomination for governor, coming in second in a crowded field. His campaigns and legislative service have all featured a strong commitment to public engagement, political reform, and economic justice.

Amanda Jaret is a labor lawyer and currently works for the United Food and Commercial Workers. Jaret previously worked as an attorney at the National Labor Relations Board and as a law fellow with the AFL-CIO. Jaret earned a B.A. from Binghamton University and a J.D. from St. John’s University School of Law.

Sammie Moshenberg is an independent consultant working with progressive organizations to help strengthen grassroots capacity and engagement. For clients as diverse as: Bend the Arc; National Coalition to Abolish the Death Penalty, National Council of Jewish Women, Committee for a Fair Judiciary, Demos, and the Leadership Conference on Civil and Human Rights, she has developed and coordinated advocacy campaigns, helped to build state advocacy coalitions, conducted research, run outreach efforts, facilitated meetings, developed and conducted trainings, created issue-based materials, and organized and implemented lobby days. Prior to starting her consultancy in July 2014, she was director of Washington operations for the National Council of Jewish Women (NCJW) for whom she worked for more than 30 years. As head of the organization’s Washington, DC, office, Ms. Moshenberg led the organization’s advocacy efforts in Washington and played a key role in mobilizing effective grassroots work on NCJW’s issues. She was instrumental in creating and expanding NCJW’s BenchMark judicial nominations campaign which has educated and mobilized tens of thousands of activists throughout the US since its inception in 2001. Among other honors, Moshenberg received NCJW’s Hannah G. Solomon Award, was named one of Women’s eNews “21 Leaders for the 21st Century” in 2008, and was listed three times on the Forward Fifty list of influential Jewish leaders. Moshenberg holds a master’s degree from Loyola University of Maryland and a B.A. from Shimer College in Illinois.

Sandeep Vaheesan is legal director at the Open Markets Institute and previously served as a regulations counsel at the Consumer Financial Protection Bureau. He has published articles and essays on a variety of topics in antimonopoly law and policy.