Syria Ten Years On: Art, Journalism, and the Struggle over Narrative 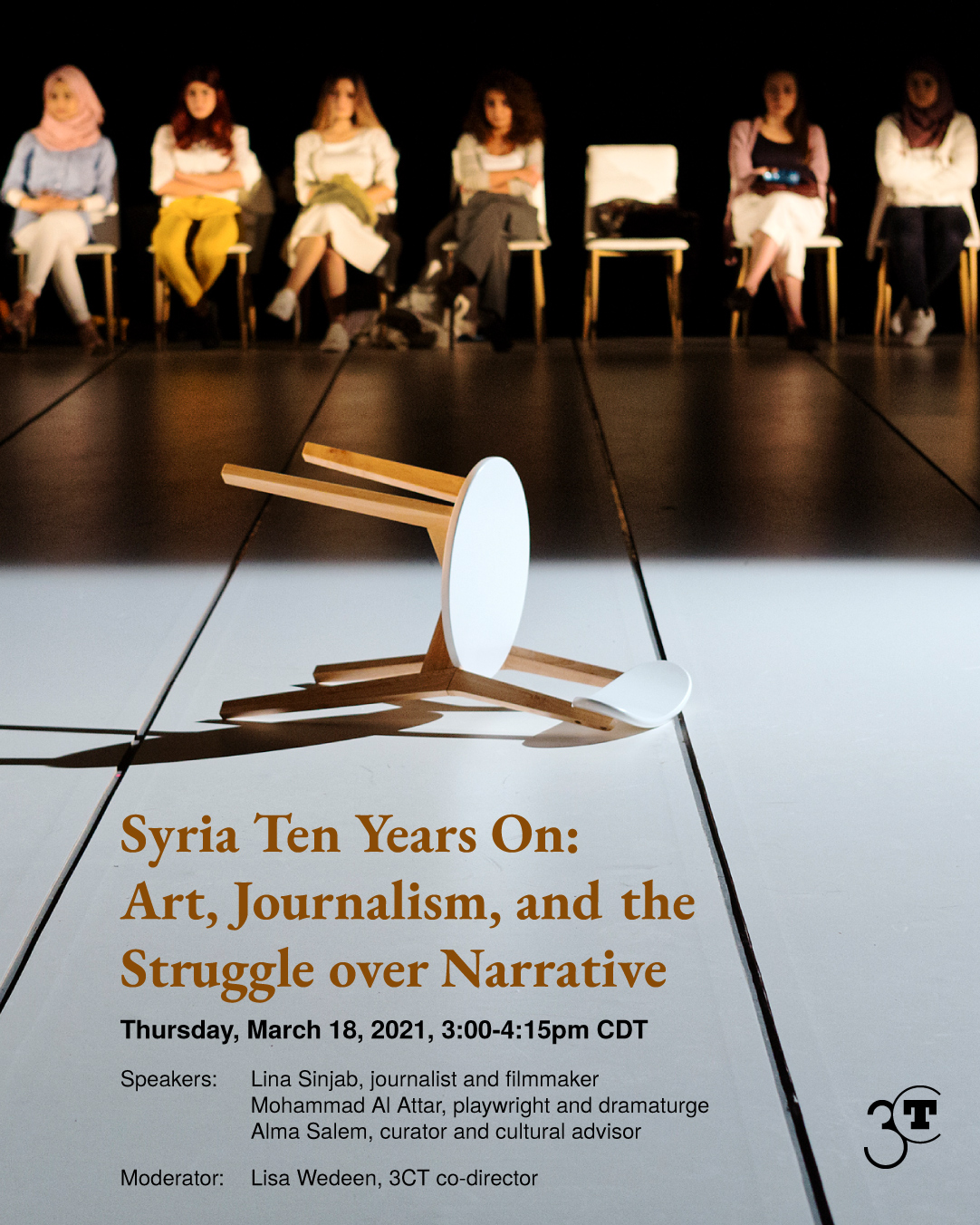 photo from Iphigenia, by Mohammad Al Attar and Omar Abusaada

This panel marks the tenth anniversary of the Syrian uprising with a conversation among three artist-journalist-curators who participated in the exhilarating initial days of the Syrian revolution. The topics to be discussed include: the struggle over narrativizing the revolutionary past and producing a sense of transformative ongoingness in the present; the relevance of different forms and genres of artistic and journalistic expression (specifically, documentary and feature filmmaking, visual arts, theater, curation, reportage, and cultural critique); and more general reflections on the relationships between aesthetics and radical politics.

Speakers include Mohammad Al Attar, a playwright and dramaturge; Alma Salem, a curator and cultural advisor; and Lina Sinjab, a journalist and filmmaker. 3CT co-director Lisa Wedeen will moderate the discussion.

This event is free and open to the public: register here to join the Zoom webinar, or visit Jadaliyya’s Facebook page for the livestream. Closed captioning will be provided. Please email us at ccct@uchicago.edu if you require any accommodations to enable your full participation.

Presented by 3CT and co-sponsored by the Arab Studies Institute and the Ten Years On: Mass Protests and Uprisings in the Arab World project.

Mohammad Al Attar is a Syrian playwright and dramaturge. He is considered an important chronicler of war-torn Syria. He studied English Literature at Damascus University and Theatrical Studies at the Higher Institute for Dramatic Arts in Damascus. He also holds an MA in Applied Drama from Goldsmiths, University of London. His plays have been staged in many languages at various international theaters and venues in around the world. They include Withdrawal (2007), Samah (2008), Online (2011), Could You Please Look into the Camera? (2011), A Chance Encounter (2012), Intimacy (2013), Antigone of Shatila (2014), While I Was Waiting (2016), Iphigenia (2017), Aleppo. A Portrait of Absence (2017), The Factory (2018), and Damascus 2045 (2019). Al Attar has written for numerous magazines and newspapers, with a special focus on the Syrian uprising since 2011.

Alma Salem is a curator, cultural advisor, and the director of the Syrian Women’s Political Movement. Her career began during a decade at the Near East French Institute—IFPO in Damascus, where she archived and established the first digital images bank of the Levant, a heritage collection introduced in her her book Photographies du Levant. She spent a second decade at the British Council, where she lead on its MENA Regional Arts Programmes. From London to Delhi, Paris to New York and Seattle, Amsterdam to the Bozar of Brussels, her curated exhibitions tour internationally. Salem is an alumni fellow of the Arts Management Institute at Maryland University, Washington, DC.

Lina Sinjab is an independent filmmaker and a freelance BBC Middle East correspondent based in Beirut. She also contributes to several international media outlets and was a consulting senior fellow with Chatham House’s “Syria From Within” project. Sinjab has extensively covered the Syrian uprising since its beginnings in 2011. Prior to joining the BBC, she was a contributor to many media outlets, including Newsweek and the New York Times. In 2019 she produced and directed a film on the siege on Aleppo, Madness in Aleppo. In 2013, she directed a film on Syrian Women during time of uprising, Suryyat, which was nominated to One Media Award. In May 2013, she won the International Media Cutting Edge Award for her coverage of Syria. She holds a degree in English from Damascus University and an MA in international politics from SOAS, University of London.