Ages of American Capitalism: A History of the United States 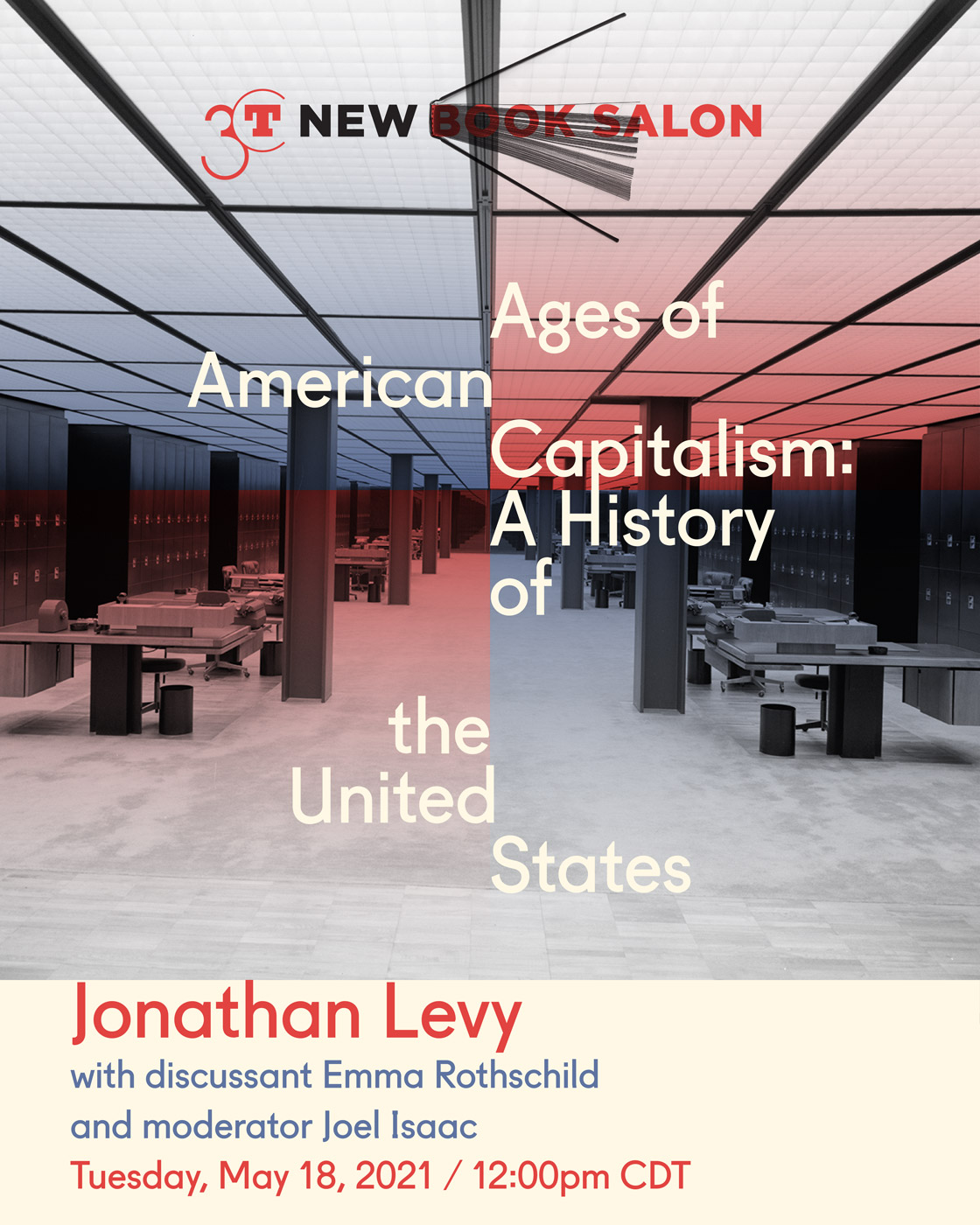 Please join us to celebrate 3CT fellow Jonathan Levy’s new book, Ages of American Capitalism: A History of the United States (Random House, 2021). Here, he joins Emma Rothschild of Harvard’s Joint Center for History and Economics in a conversation moderated by Joel Isaac.

Today, in the midst of a new economic crisis and severe political discord, the nature of capitalism in United States is at a crossroads. Since the market crash and Great Recession of 2008, historian Jonathan Levy has been teaching a course to help his students understand everything that had happened to reach that disaster and the current state of the economy, but in doing so he discovered something more fundamental about American history. Now, in an ambitious single-volume history of the United States, he reveals how, from the beginning of U.S. history to the present, capitalism in America has evolved through four distinct ages and how the country’s economic evolution is inseparable from the nature of American life itself.

The Age of Commerce spans the colonial era through the outbreak of the Civil War, a period of history in which economic growth and output largely depended on enslaved labor and was limited by what could be drawn from the land and where it could be traded. The Age of Capital traces the impact of the first major leap in economic development following the Civil War: the industrial revolution, when capitalists set capital down in factories to produce commercial goods, fueled by labor moving into cities. But investments in the new industrial economy led to great volatility, most dramatically with the onset of the Great Depression in 1929. The Depression immediately sparked the Age of Control, when the government took on a more active role in the economy, first trying to jump-start it and then funding military production during World War II. Skepticism of government intervention in the Cold War combined with recession and stagflation in the 1970s led to a crisis of industrial capitalism and the withdrawal of political will for regulation. In the Age of Chaos that followed, the combination of deregulation and the growth of the finance industry created a booming economy for some but also striking inequalities and a lack of oversight that led directly to the crash of 2008.

In Ages of American Capitalism, Jonathan Levy proves that, contrary to political dogma, capitalism in the United States has never been just one thing. Instead, it has morphed throughout the country’s history—and it’s likely changing again right now.

This event is free and open to the public; registration is required. Live captioning will be provided. Please email us at ccct@uchicago.edu if you require any accommodations to enable your full participation.

Presented by 3CT and co-sponsored by the Joint Center for History and Economics at Harvard University, the Seminary Co-op Bookstore, and the Law, Letters, and Society program at the University of Chicago.

Jonathan Levy is a historian of economic life and of the United States, with interests in the relationships among business history, political economy, legal history, and the history of ideas and culture. In addition to being a member of the Department of History and the John U. Nef Committee on Social Thought, Levy is the current Faculty Director of the Law, Letters, and Society program.

Emma Rothschild is Jeremy and Jane Knowles Professor of History at Harvard University. She is Director of the Joint Center for History and Economics, a fellow of Magdalene College, Cambridge, and professeur invitée at the Centre d’Histoire de Sciences Po, Paris. She is involved in collaborative research projects, at the University of Cambridge and at Harvard, on Exchanges of Economic, Legal and Political Ideas and on Visualizing Historical Networks. She is also an Affiliated Faculty member at Harvard Law School. Publications include “Economic History and Nationalism” (Capitalism, Winter 2021), “A (New) Economic History of the American Revolution?” (New England Quarterly, March 2018), “Isolation and Economic Life in Eighteenth-Century France” (American Historical Review, October 2014), Economic Sentiments: Adam Smith, Condorcet and the Enlightenment (Harvard University Press, 2001), The Inner Life of Empires: An Eighteenth-Century History (Princeton University Press, 2011), and An Infinite History: The Story of a Family in France Over Three Centuries (Princeton University Press, 2021).

Joel Isaac is Associate Professor of Social Thought in the John U. Nef Committee on Social Thought at the University of Chicago. His research focuses on the history of philosophy and the social sciences in the nineteenth and twentieth centuries. He is the author of Working Knowledge: Making the Human Sciences from Parsons to Kuhn (Harvard 2012) and, most recently, the co-editor of States of Exception in American History (Chicago, 2020).