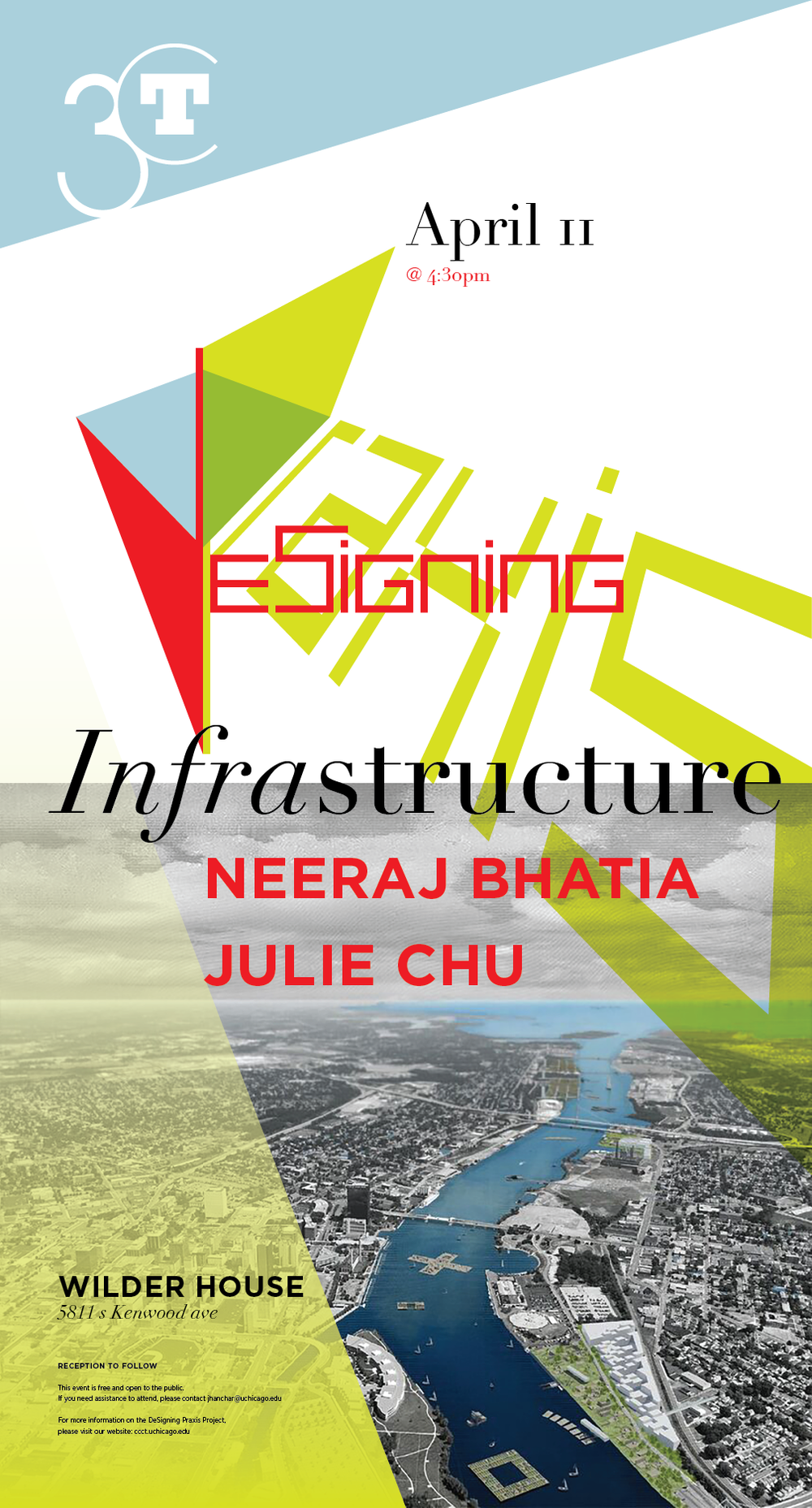 The siting of the Obama Presidential center; the boycotting of the Lucas museum; the lingering ruin of Chicago’s central Post Office; the picturesque prospects of this city’s lakeshore and the messy politics of its inheritance are legacies of a grand infrastructural design: Daniel Burnham’s 1909 “Plan of Chicago.” Burnham introduces his Chicago Plan with this oft-quoted challenge to future designers of infrastructure:

“Make no little plans; they have no magic to stir men’s blood and probably themselves will not be realized. Make big plans; aim high in hope and work, remembering that a noble, logical diagram once recorded will never die, but long after we are gone will be a living thing, asserting itself with ever-growing insistency.”

For the third installment of the DeSigning Praxis Dialogue series, a UChicago anthropologist—Julie Chu—and an architect, urban designer and architecture theorist—Neeraj Bhatia—will discuss the intersection and implication of design and infrastructure. Previous talks have considered the role of design as a world imaging, cosmological enterprise. Taking Burnham’s statement about the immortality of infrastructural design as an opening provocation, Chu and Bhatia’s discussion of DeSigning Infrastructure will add new layers, scales, materialities and politics to our understanding of how Design is made praxiological, this time through infrastructure.

Neeraj Bhatia will present several of his designs that illustrate how various infrastructural processes can foster new world imaginaries that “expand geologics” through the De-Signing afforded by what he calls “soft infrastructures.” These labile, dynamic “ecosophic” (Guattari 2000) relations amongst social relations, the environment and subjectivities assume spatial form in the dialectics between infrastructure and architecture. “Within this expanded geologics, culture, politics, economics, and ecology find synergetic opportunities that empower new subjects to be agents within what was once an engineered system of global capital” (Bhatia 2016).

Julie Chu will draw from her ethnographic experience and material for her forthcoming book, The Hinge of Time: Infrastructure and Chronopolitics at China’s Global Edge, to discuss the “ambiguous signs” (Chu 2014) that infrastructure materializes and the consequent social processes and political imaginaries of “more distributed forms of agency” (ibid) it makes possible.

Julie Chu, “When Infrastructures Attack: The Workings of Disrepair in China”

Julie Chu, “Boxed In: Human Cargo and the Technics of Comfort”