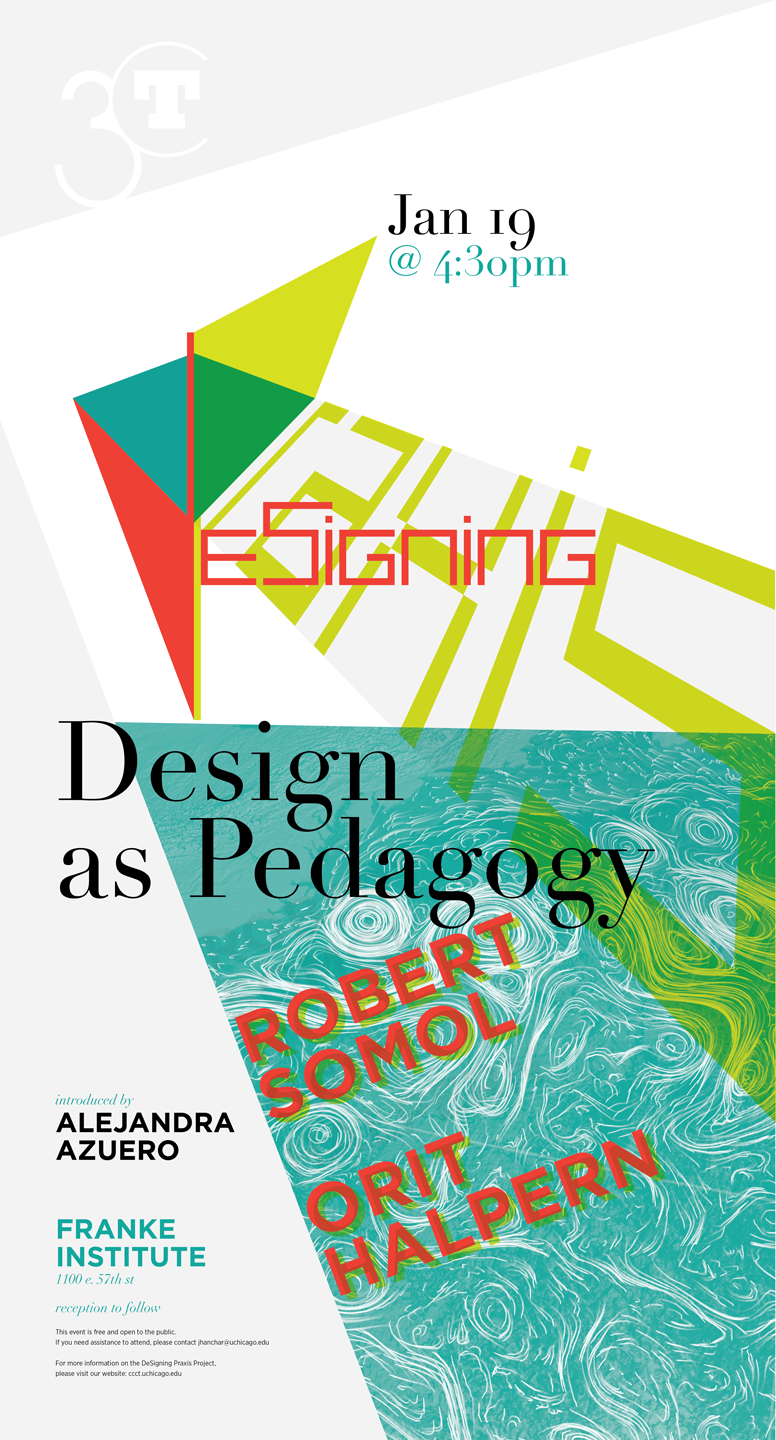 For the inaugural conversation of the DeSigning Praxis dialogue series, 3CT brings together Robert Somol, director of the school of architecture at UIC, and Orit Halpern, historian of science and scholar of mid-twentieth century pedagogies of design, for a discussion on their current critical engagements with the praxis and theory of teaching architecture and design.

How do we teach design in the 21st century when, as Robert Somol points out in his analysis of the 2016 Chicago Architecture Biennial, the death of the 20th century “starchitect” marks both the death of an architectural subject and the coming into being of new design agencies? How do we think critically about design-teaching in the present when, as Orit Halpern shows in her book, Beautiful Data, the emergence of new pedagogies of design in post-World War II America marks the reconfiguration of powerful and still unfolding forms of neo/liberal governance?  Finally, both Halpern and Somol demonstrate that design and architectural pedagogy trace new curves of visibility. But where, pedagogically, does or can one draw a line between design and architecture?

Robert Somol has been the Director of the School of Architecture since 2007. A design critic and theorist, he is the editor of Autonomy and Ideology and has served on the editorial boards of Any and Log.  His writings have appeared in publications ranging from Assemblage to Wired, and will appear in his collection of essays, Nothing to Declare. Somol is the co-designer of off-use, an award-winning studio and residence in Los Angeles that extends his interest in combining the speculative discipline of modernism with the material excesses of mass culture. Somol is in the process of completing a book manuscript, This Will Cover That: Writing and Building from the Death of Corbusier to the End of Architecture. Read more about Somol’s approach to pedagogy here.

Orit Halpern is a Strategic Hire in Interactive Design and Theory and an Associate Professor in the Department of Sociology and Anthropology at Concordia University, Montréal. Halpern is also a co-director of the Speculative Life Research Lab a design research cluster at the intersection of art and the life sciences, architecture and design, and computational media that is part of the Milieux, Institute for Technology, Art and Culture.  Halpern’s work bridges the histories of science, computing, and cybernetics with design and art practice.  Her most recent book Beautiful Data: A History of Vision and Reason since 1945 (Duke Press 2015) is a genealogy of interactivity and our contemporary obsessions with “big” data and data visualization.  She is currently working on two books.  The first, titled The Smart Mandate, is a history and theory of “smartness”, environment, and ubiquitous computing and the second is about speculative design practices and politics.  She has also published and created works for a variety of venues including The Journal of Visual Culture, Public Culture, Configurations, C-theory, and ZKM in Karlsruhe, Germany.  Read more about Halpern’s current initiatives on Speculative Life and the Millieux.