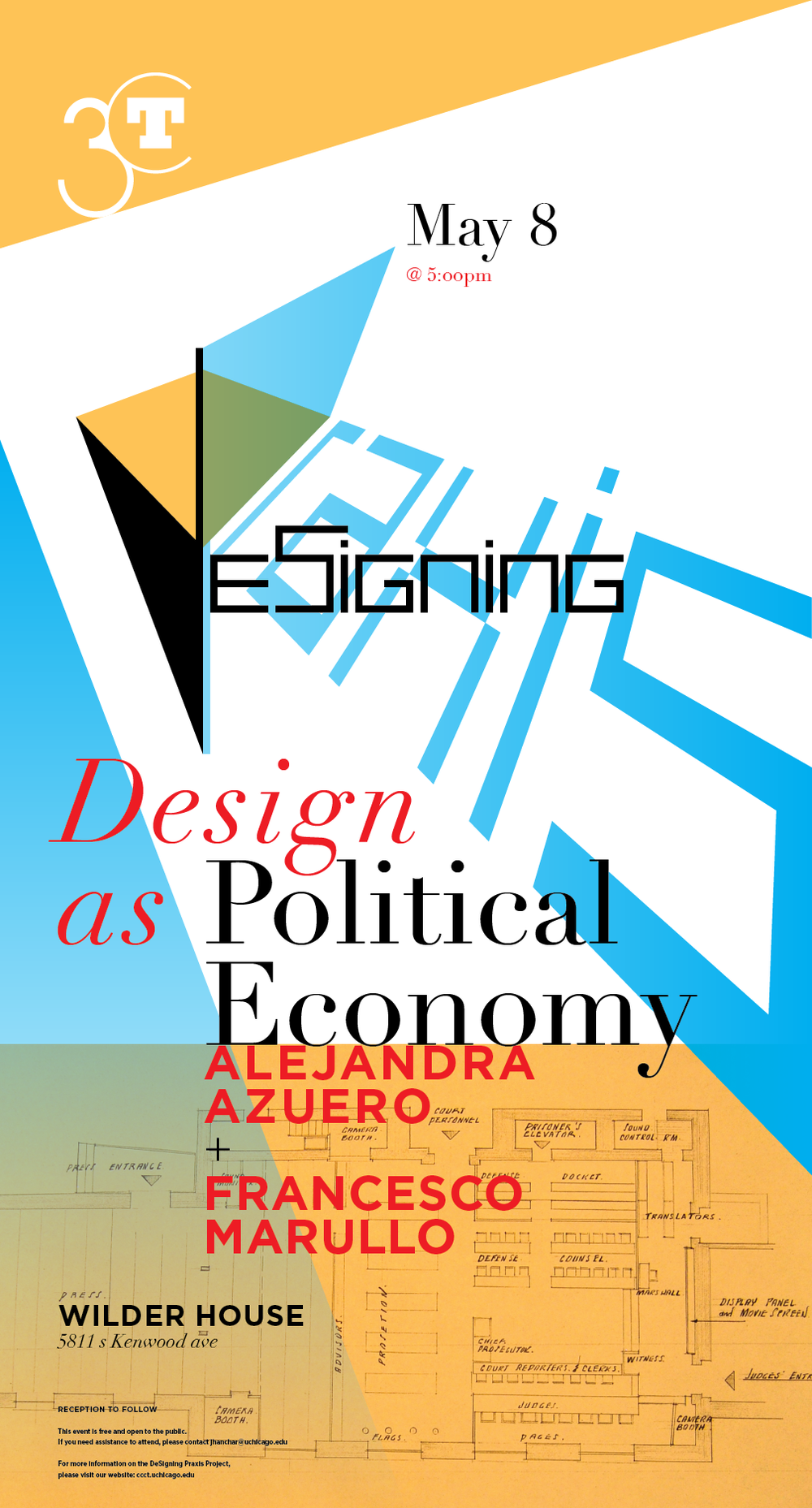 In 2002, at the onset of the new millennium, Hal Foster diagnosed the 21st century as the era of “total design”—a condition defined by the almost seamless synthesis of the aesthetic and the utilitarian into the commercial. In Foster’s account, this process of “inflation” by which design becomes a total ordering logic in the 21st century—a historical condition with a force of its own—results from the intensification and transformation of a process rooted in the rise of political economy and later on its consolidation in the 20th century synthesis of beauty and utility as “product-design” (Sloterdijk, 2009).

The fourth installment of the DeSigning Praxis series brings together a lawyer/anthropologist—Alejandra Azuero—and architect and architecture theorist—Francesco Marullo—to discuss the coming into being of a world of total design as a historical process of alignment of epistemologies, practices, and theories of design with modes for producing economic and legal order. Previous talks have considered the role of design as world imaging, cosmological, and infrastructural enterprise. Taking Foster’s account of design as an always already compromised mode of intervening in the world as point of departure, Azuero and Marullo’s discussion of Design as Political Economy will offer us a way to consider how design is made praxiological, this time by considering some of the historical processes through which design has been violently and exploitatively brought into alignment with projects for social ordering.

Alejandra Azuero will draw from her most recent project “Conviction by Design: [Re]Designing Criminal Responsibility at the Nuremberg Trials,” to discuss how design, like crime, has a particularly North-Atlantic history as a universal lens through which societal failures and alternatives to existing socio-political have been articulated. The “dialectic of design and crime,” Azuero will argue, was both reset and intensified during WWII. Her investigation reveals the American project to prosecute Nazi crimes as one in which criminal punishment became a design object at the same time that design became an object of criminal punishment.

Francesco Marullo will reread a 1972 Archizoom Associati project for the extension of the Florence University. Through their provocative conjecture, Archizoom unveiled how the closed disciplinary space of the factory would have soon drastically evolved towards a much more perverse, open, “universal condition” of production, able to integrate the whole territory into an endless apparatus for capitalizing common knowledge. Relocating several features of the Archizoom project within current tendencies and concerns of architectural design, Marullo will elaborate on the relation between architecture, cognitive production and freelance labor.