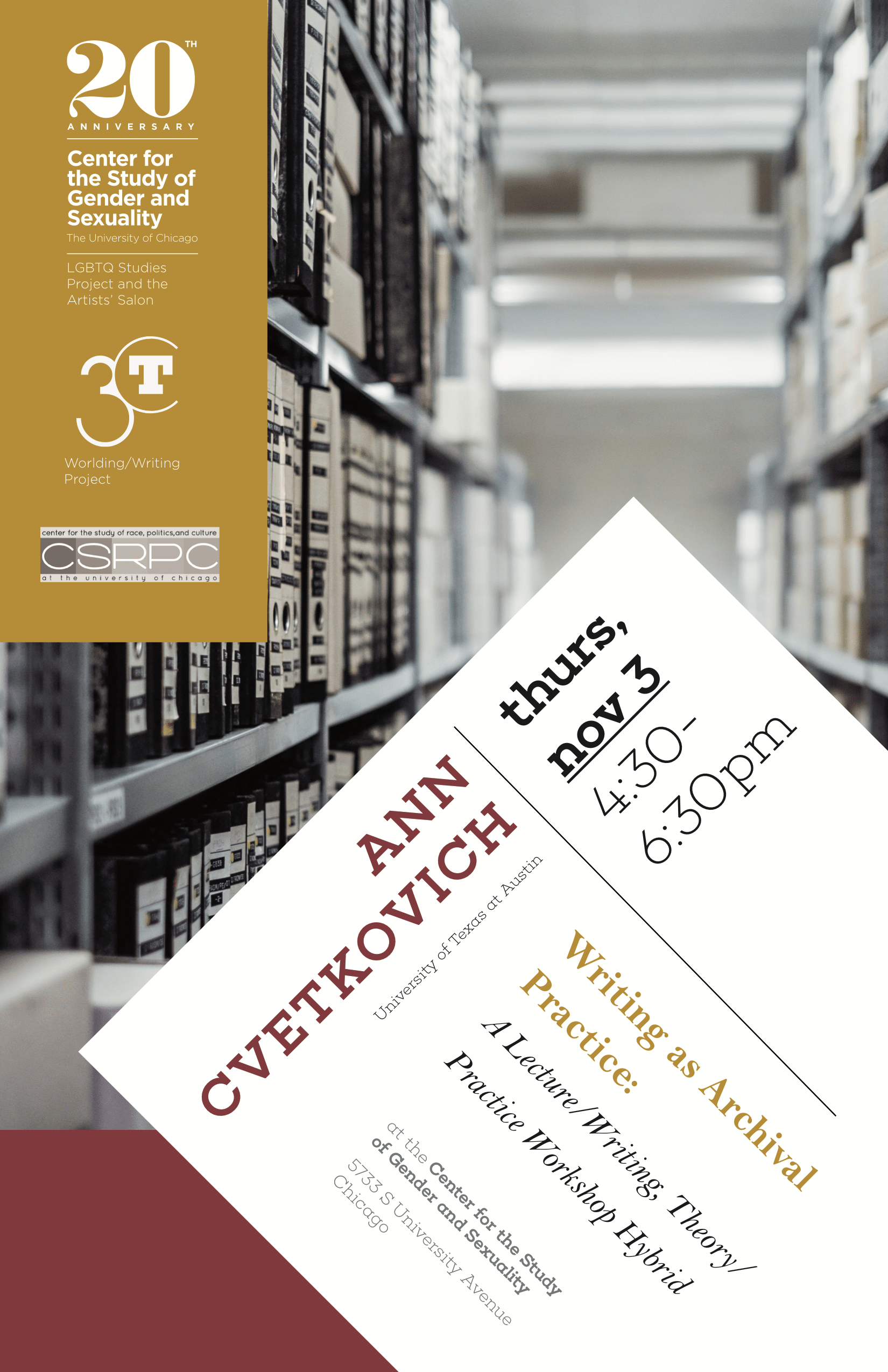 What can scholarly writing learn from contemporary forms such as creative non-fiction, lyric essay, graphic narrative, or mixed media? Part lecture, part discussion and part group-writing workshop, this event will draw from Cvetkovich’s ongoing research projects, including a book on the current state of LGBTQ archives and the creative use of them by artists. These models will serve as a point of departure for collective writing exercises done in the real time of the workshop. In particular, we will focus on the list, series, or collection as models for writing practice. Questions to be pursued include the following: How can one organize an archive or a collection of objects, photographs, texts, or other artifacts in multiples or series to serve as the basis for research and writing? What do various forms of writing – at the level of both sentence and structure – do to represent, describe, or remediate data or evidence, and how can such work place pressure on conventional models of data and evidence? How can developing a writing practice not only address methodological and intellectual/theoretical questions but make it easier to get work done? We will write periodically throughout the event, by ourselves (with our objects) and collaboratively, with each other.

An object can be anything: an idea, a thing in the world, a text you want to engage, a problem. If possible, please bring an artifact, and we will produce ways to think about its place in a larger series or collection (actual or still imaginary) that can serve as a platform for transforming what you and others can think about it.

Ann Cvetkovich is Ellen Clayton Garwood Centennial Professor of English and Professor of Women’s and Gender Studies at the University of Texas at Austin.  She is the author of Mixed Feelings:  Feminism, Mass Culture, and Victorian Sensationalism (Rutgers, 1992); An Archive of Feelings:  Trauma, Sexuality, and Lesbian Public Cultures (Duke, 2003); and Depression:  A Public Feeling (Duke, 2012). She is writing a book about the current state of LGBTQ archives and the creative use of them by artists to produce counterarchives and interventions in public history.

This event is free and open to the public. Part of 3CT’s Worlding/Writing Project, the LGBTQ Studies Project and the Artists’ Salon at the Center for the Study of Gender and Sexuality.