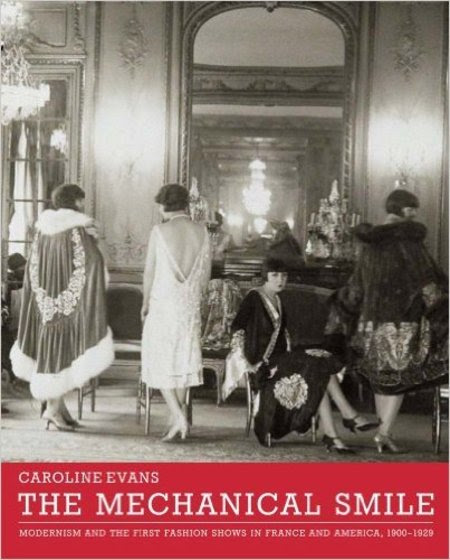 Please join author Caroline Evans and the 21st Century Workshop for a discussion of The Mechanical Smile: Modernism and the First Fashion Shows in France and America, 1900-1929.

In The Mechanical Smile Evans explores the connections between the first fashion shows and early cinema, arguing that they functioned (in the Benjaminian sense) as “new velocities”—forces that altered the rhythms of modern life.  Using significant new archival evidence, Evans shows how so-called “mannequin parades” employed the visual language of modernism to translate business and management methods into visual seduction. Drawing on literary and performance theory rather than art and design history, she argues for an expanded definition of modernism as both gestural and performative.

This event is co-sponsored by UChicago Arts, The Franke Institute for the Humanities, Art History Department, Department of English, Office for Civic Engagement, School of the Art Institute of Chicago, and MODA at Chicago.

Caroline Evans is Research Leader in the Fashion Programme at Central Saint Martins where she convenes the Fashion History and Theory Research Group.

She studied art history at the University of Sussex. Her first book on fashion history and theory was published in 1989 and since then she has written extensively on twentieth-century and contemporary fashion. She has been a consultant to international fashion exhibitions at the V&A (London), Museum of London, Musée Galliera (Paris) and others. She is the author of several exhibition catalogue essays on designers including Paul Poiret, Hussein Chalayan and Victor & Rolf.

She was the principal investigator for two large AHRB-funded projects, Fashion and Modernity, stage 1 (1999-2000) and stage 2 (2001-2004). From 2007-2010 she was the recipient of a Leverhulme Senior Research Fellowship. She sits on several advisory and editorial boards, including Fashion Theory, The International Journal of Fashion Studies, the Bloomsbury Fashion Photography Archive, and the ‘Dress Cultures’ series for I.B. Tauris Publishers. She lectures internationally and since 2010 she has been a visiting professor at the Centre for Fashion Studies at Stockholm University.