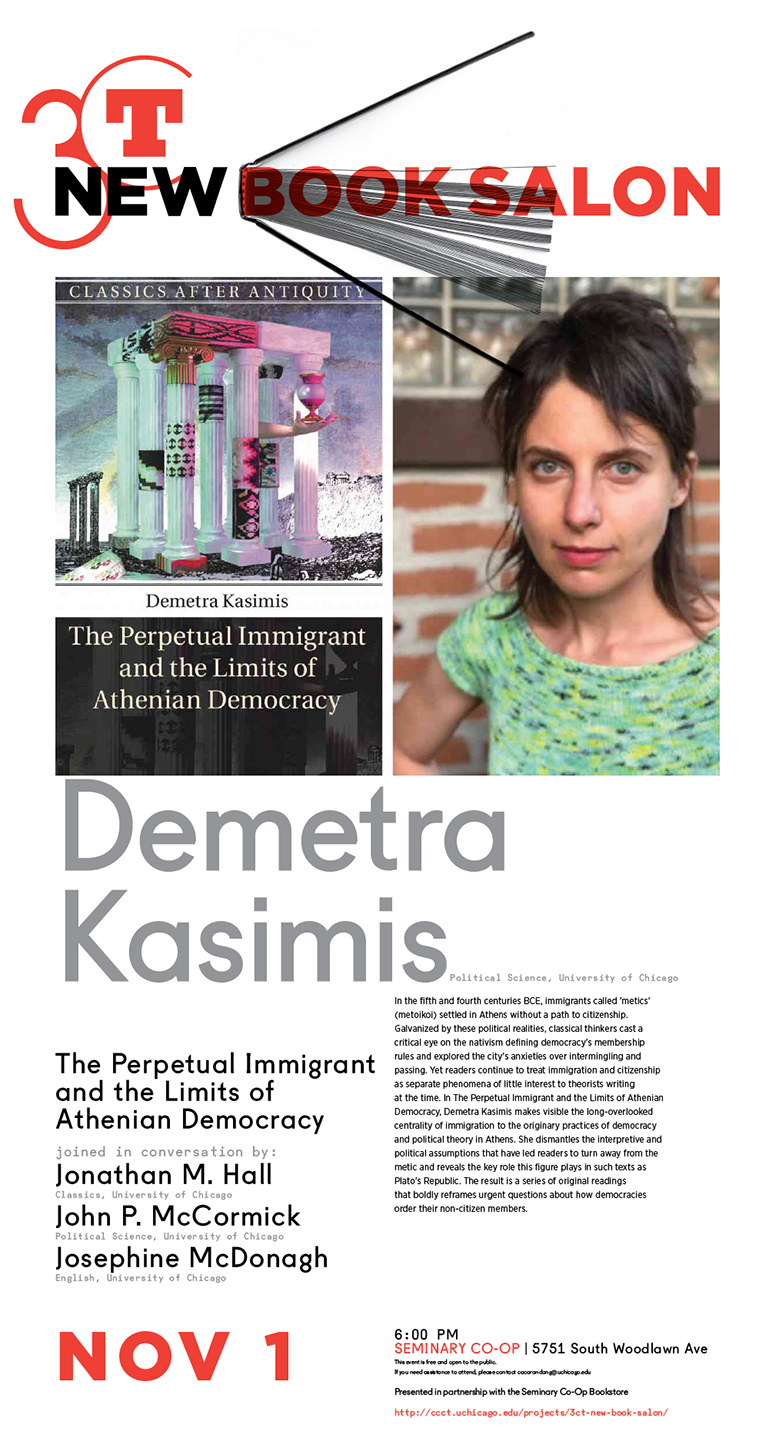 Demetra Kasimis discusses The Perpetual Immigrant and the Limits of Athenian Democracy. She will be joined in conversation by Jonathan M. Hall, John P. McCormick, and Josephine McDonagh. A Q&A and signing will follow the discussion.

About the book: In the fifth and fourth centuries BCE, immigrants called ‘metics’ (metoikoi) settled in Athens without a path to citizenship. Galvanized by these political realities, classical thinkers cast a critical eye on the nativism defining democracy’s membership rules and explored the city’s anxieties over intermingling and passing. Yet readers continue to treat immigration and citizenship as separate phenomena of little interest to theorists writing at the time. In “The Perpetual Immigrant and the Limits of Athenian Democracy,” Demetra Kasimis makes visible the long-overlooked centrality of immigration to the originary practices of democracy and political theory in Athens. She dismantles the interpretive and political assumptions that have led readers to turn away from the metic and reveals the key role this figure plays in such texts as Plato’s Republic. The result is a series of original readings that boldly reframes urgent questions about how democracies order their non-citizen members.

This event is presented in partnership with the Seminary Co-Op Bookstore.

Demetra Kasimis is Assistant Professor in the Department of Political Science at the University of Chicago, where she specializes in democratic theory and the thought and politics of ancient Greece. Her research in political theory has been supported by awards from the National Endowment for the Humanities, the American Council for Learned Societies, and the Fulbright and Mellon Foundations. The Perpetual Immigrant and the Limits of Athenian Democracy (Cambridge UP, 2018) is her first book.

Jonathan M. Hall is the author of Ethnic Identity in Greek Antiquity (Cambridge, 1997), which received the 1999 Charles J. Goodwin Award for Merit from the American Philological Association; Hellenicity: Between Ethnicity and Culture (Chicago, 2002), which was the recipient of the 2004 Gordon J. Laing Award from the University of Chicago Press; A History of the Archaic Greek World, ca. 1200–479 BCE” (2nd edition: Chichester, 2014); Artifact and Artifice: Classical Archaeology and the Ancient Historian (Chicago, 2014); and a series of articles and chapters concerning the political, social, and cultural history of the Greek world. He has taught at the University of Chicago since 1996 and was awarded the Quantrell Award for Excellence in Undergraduate Teaching in 2009.

John P. McCormick is Professor in the Department of Political Science and the College at the University of Chicago. He is the author of several books on the history of political thought and democratic theory, most recently, Reading Machiavelli (Princeton University Press, 2018).

Josephine McDonagh is Professor in the Department of English Language and Literature, University of Chicago. Before coming to Chicago she taught in a number of universities in Britain and Ireland, most recently University of Oxford and King’s College London. She is author of De Quincey’s Disciplines (Oxford University Press, 1994), George Eliot (Northcote House, 1997), and Child Murder and British Culture 1720–1900 (Cambridge University Press, 2003), and has co- edited a number of volumes, most recently (with Joseph Bristow), Nineteenth-Century Radical Traditions (Palgrave, 2016) and (with Supriya Chaudhuri, Brian Murray and Rajeswari Sunder Rajan) Commodities and Culture in the Colonial World (Routledge, 2018). Her study of literature and migration in the nineteenth century is in process.