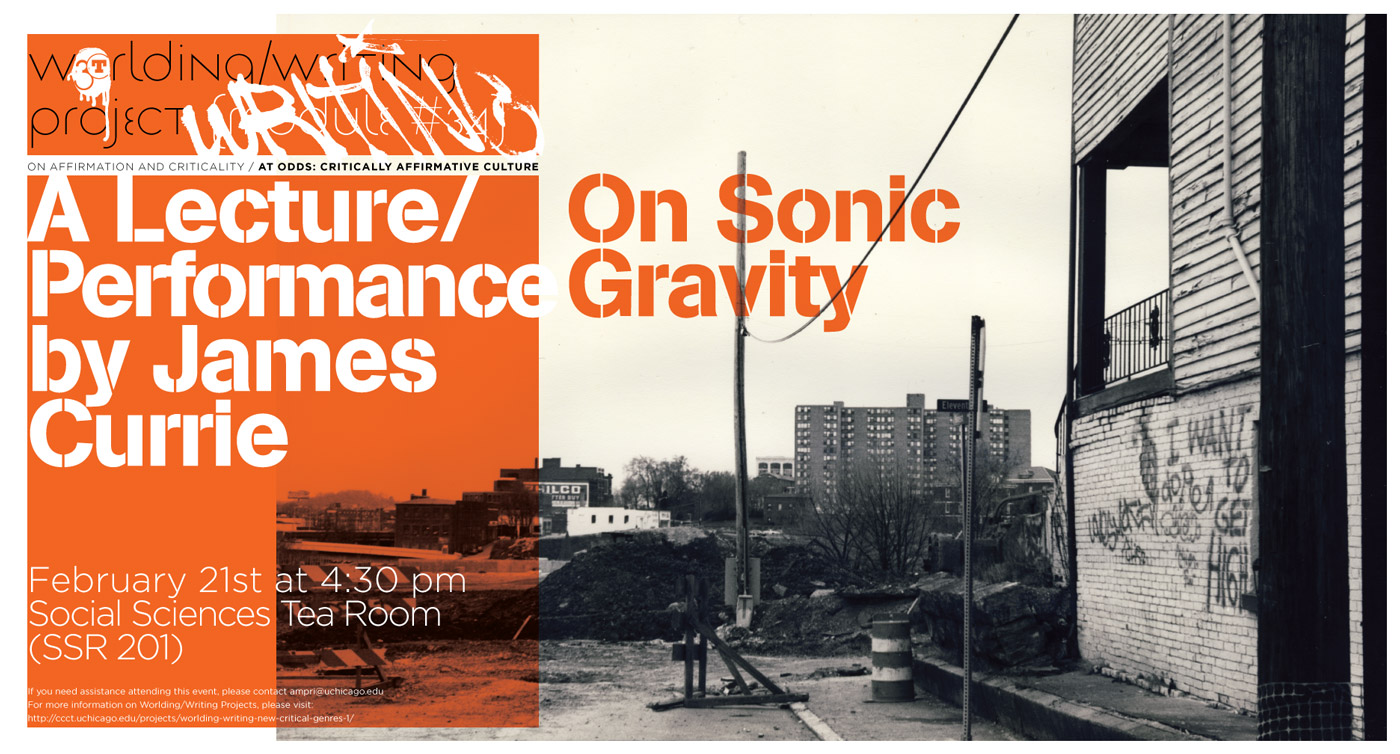 Gravity preaches the following ethics: since things tend to fall until they can fall no longer one should build one’s house on solid ground. But modernity comically undermines this stance by making all that is solid melt into air. As a result, some simply assert restlessness as the new stability. But others, flirting with performative paradoxes and dodgy kinds of aesthetic magic, have experimented with intense forms of concentration in the hope of trying to set up house on points of gravity suspended above the normal base: they have wondered about the discipline of only living in the trees (Calvino), of becoming part bird (Mozart),  finding inspiration in marionettes (Kleist and Rilke), or only acknowledging the reality of a tightrope (Genet) or trapeze (Kafka and Wim Wenders). Starting with reflections on how music might be another such form of defying gravity, James Currie will enact a set of improvisations on themes taken from those who spurn the ground. He will seek to investigate how our critical labors might find inspiration in activities such as these, which, in order to be effectively pulled off, must on some level become massively indifferent to everything else.

This talk is part of our year-long series “On Affirmation and Criticality.” It is the third event in the series’ second segment: “At Odds: Critically Affirmative Culture.” This segment turns to the foundational opposition between critical theory and affirmation, to ask: Are we, as critical theorists, attached to keeping ourselves at odds with the world, perhaps at the cost of looking closer at the places where we are at odds with ourselves in the work of thinking and writing? Does the commandment to criticality not involve its own affirmations, consolations, and pleasures? And does affirmation necessarily involve anti-critical disavowal? Other speakers in the series include Sianne Ngai, Alexei Yurchak, and Eric Hayot.

James Currie is a writer and performer whose work has been concerned with articulating the points of interaction and dislocation between music, history, philosophy, and politics. His scholarly writings have appeared widely, including in the Journal of the American Musicological Society, The Musical Quarterly, Popular Music, Music and Letters, Women and Music, and in a number of collections. His book, Music and the Politics of Negation (Indiana University Press, 2012), is simultaneously an extended political and philosophical critique of the pervasive postmodern ideologies of the contemporary academy and an investigation into the continuing relevance of the founding principles of modernity and their articulation within the music of the Viennese Classics. Educated at Cambridge and Columbia, where he wrote a dissertation on fugal counterpoint and Enlightenment thinking in the music of Haydn, Mozart, and Beethoven, he held a post-doctoral research position in the Society of Fellows in the Humanities at Columbia University and taught in the College of Music at Loyola University in New Orleans before coming to the Department of Music at the University at Buffalo in 2003, where he is now an Associate Professor.