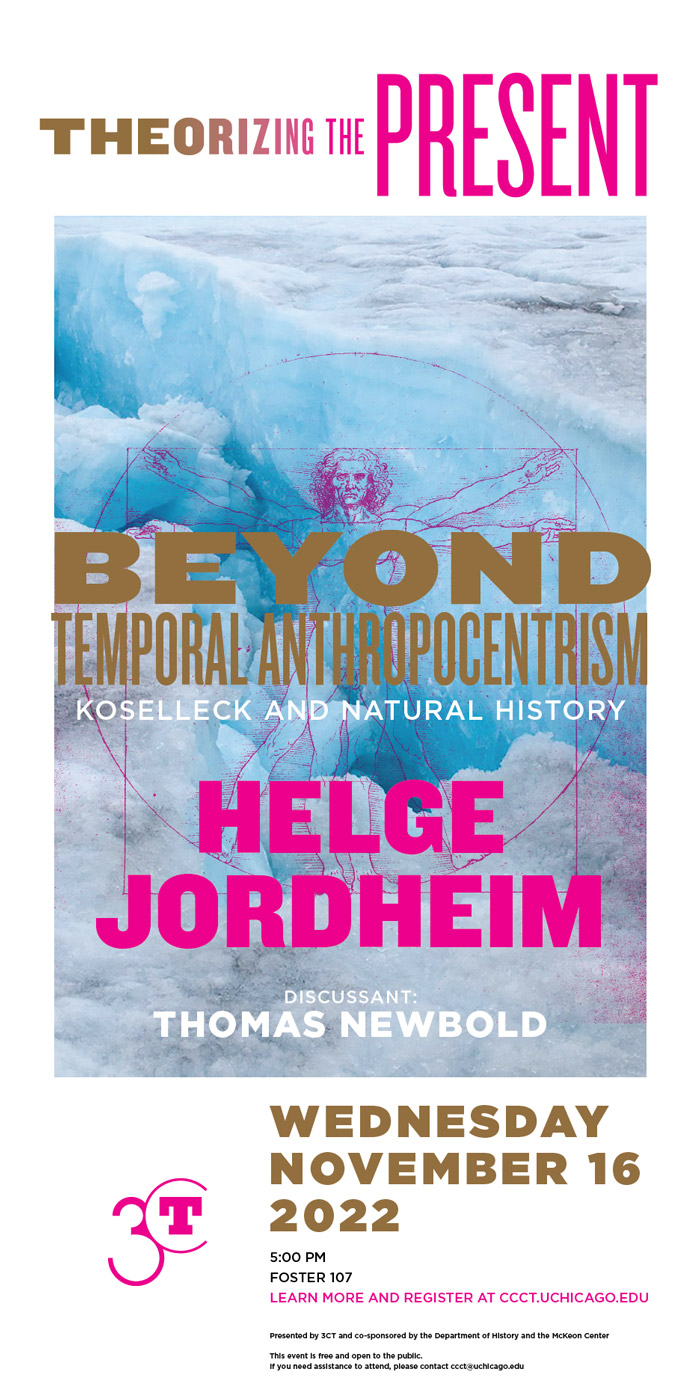 In this lecture, Helge Jordheim offers a rereading of Reinhart Koselleck that puts his work at the center of ongoing debates about how to write histories that can account for humanity’s changed and changing relationship to our natural environment—or, in geological terms, to our planet. This involves engaging with the urgent realities of climate crisis and the geological agency of humans, framed by the concept of the Anthropocene. Jordheim asks whether Koselleck’s essays from the 1970s and after contain ideas, arguments, theories, and methods that may prove useful in collapsing “the age-old humanist distinction between natural history and human history,” to use Dipesh Chakrabarty’s phrase.

The first part of this talk discusses Koselleck’s “temporal anthropocentrism,” which was handed down in German historicism and hermeneutics from the eighteenth century onward in the shape of what Jordheim calls the Vitruvian Man of Time. In Koselleck’s work, this superimposition of the human onto the multiple lifetimes of the planet is most clearly expressed in his claim about the “denaturalization” of history at the beginning of modernity. The second part observes a shift in Koselleck’s engagement with nature beginning in the 1980s; this shift is presented in terms of a “renaturalization.” The theoretical and methodological tool for this re-entanglement of the times of history and the times of nature is his theory of multiple times. Originally limited to the human, this theory raises to the task of including an increasing number of natural times that are no longer perceived as stable, static, and slow but as continuously accelerating due to “human use.” In conclusion, Jordheim suggests that Koselleck’s work offers the framework for a theory of “lifetimes” that can replace modernist history as platform for writing new natural histories for the future.

Thomas Newbold will be the discussant.

Helge Jordheim is Professor of Cultural History at University of Oslo. He has published extensively on 18th-century intellectual culture in Europe as well as on conceptual history and philology. Some of his most recent works are Conceptualizing the World: An Exploration across Disciplines (co-edited with Erling Sandmo), which traces the emergence of the world in multitudinous representations, practices, and human experiences ranging from antiquity to the era of Google Earth (Berghan Books, 2018), and Universal History and the Making of the Global (co-edited with Hall Bjørnstad and Anne Régent-Susini), a work which traces the history of universal history from the late Middle Ages until the early nineteenth century.  In 2015, he co-edited Civilizing Emotions with Margit Pernau, a book on the global history of the concepts of civility and civilization written by an international team of scholars (Oxford University Press, 2015).

Thomas Newbold is a Teaching Fellow in the Social Sciences at the University of Chicago, where he teaches in the “Self, Culture and Society” sequence. A historian working on the intellectual history of modern South Asia and the British empire, Thomas received a PhD in South Asian Languages and Civilizations and in History from the University of Chicago in 2022. His dissertation –The Critical Age: modern periodization and moral revaluation in colonial Bengal – investigated the ways in which the development of moral and social critiques in the nineteenth century furthered the sense that a new epoch – modernity – was at hand. His writing has appeared in The Economic and Political Weekly and in Dhaka’s Daily Star.

Presented by 3CT and co-sponsored by the Department of History and the Institute on the Formation of Knowledge.