Attachment Issues: Psychopolitics and the Everyday 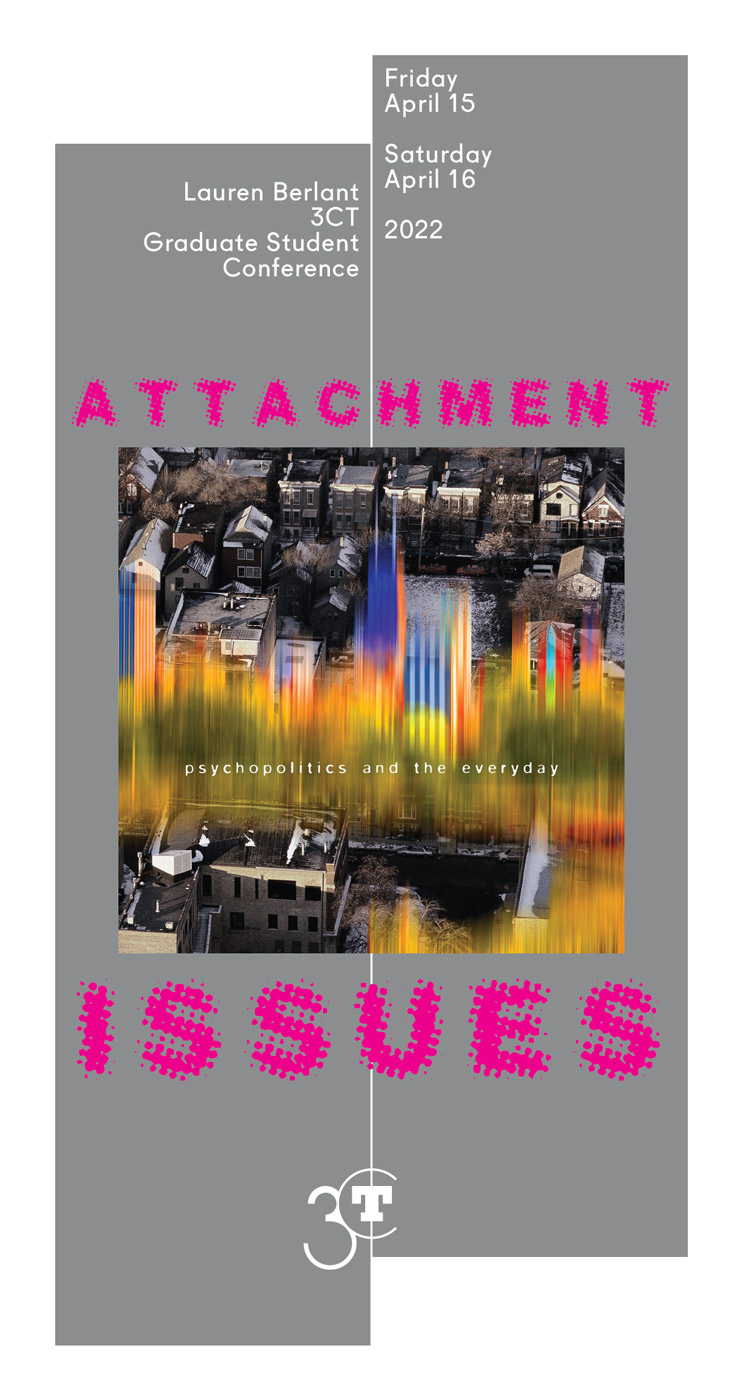 When Frantz Fanon wrote about the mental disorders spurred by the “favorable breeding ground” of the Algerian War, he described a process through which the world forced itself into the mind. He reversed the typical explanation of mental disorders as individual and pathological, tracing them instead to their collective, worldly attachments. Rather than a psychocentric interpretation, Fanon gave a pyschopolitical one.

Psychopolitics offers a mode of investigation that addresses the conjoining of the public and private that worlds our every day. By acknowledging the power of materials (be they objective or literary) to move and create political subjectivities, psychopolitics analyzes what seem to be solely individual experiences through their collective, social attachments. Some of these attachments we make, tying ourselves, as Lauren Berlant describes, to objects and scenes that promise to deliver “the good life,” even as they obstruct our own flourishing. Others are made to us, by wars and weathers and economies that depress and stress in unevenly distributed ways.

Applying Fanon’s interpretive approach more broadly, the conference presenters are Chicago-area graduate students who use a psychopolitical framework to describe how subjectivities are created, how desires are made and maintained, how resistance is consolidated or coopted, and how participation is forced or brought about.

This is a 3CT-supported graduate student conference organized by James Bradley, Tim DeMay, and Niu Teo.

“Neoliberal Toilets: A Social History of the Public Bathroom”
Esti Shapiro, School of the Art Institute of Chicago

“‘Us’ in Theory: Reciprocity, Starvation, and the Subjunctive in Melville’s ‘Bartleby, The Scrivener’ and Gide’s La Porte étroite”
Leif Turner, University of Chicago

9:30-10:00am —Breakfast provided for all in-person attendees

“Muslims as Untouchables: Psycho-affective Survival of the Bengali Muslims at the Turn of the Century”
Taimur Reza, University of Chicago

“Scientists on Twitter: The Public Discourse of Epidemiologists on Social Media during the COVID-19 Pandemic”
Eugene Yu Ji, University of Chicago

5:00pm — Post-conference social at The Pub

Damien Bright is a cultural anthropologist studying the shifting nature of marine life and its scientific description, along with their implications for the governance of planetary crisis. His dissertation, titled “Whither The Reef? Marine futures and ethical positioning at extinction’s edge,” analyzes the overlapping practical and moral quandaries that arise as the sciences of marine life embark upon large-scale and ostensibly experimental “interventions” in the name of planetary care. His research interests, more broadly, include the psychosocial dimensions of modernist technoscience, the critical potential of natural history, and the moral status of nonhuman entities.

Emily Buff is in the MA program in the Social Sciences at the University of Chicago. Her research interests include material space and memory, the formation of aesthetics, and the creative arts in the 20th and 21st centuries.

Matthew Foreman (originally from Hong Kong) is a PhD candidate in History at Northwestern University. His dissertation, “Science and Security: Constructing the Modern Chinese Citizen, 1900-1966” examines the historical conditions through which the concept “mixed-blood” emerged in the Chinese imagination alongside the political-intellectual construction of Chinese citizenship.

Matt Gallagher is graduating from Loyola University Chicago’s master of arts program in Women’s Studies and Gender Studies this coming May. His research interests include masculinities, ancient Greek literature, epic poetry, classical reception, and popular culture. He successfully defended his master’s thesis on the topic of toxic masculinities in the Marvel Cinematic Universe as a result of their adherence to ancient narrative structures. After completing his master’s degree, Matt plans to apply to PhD programs in Comparative Literature and pursue a career in academia.

Sam Herrmann is a Masters student at the University of Chicago Divinity School where he studies the history of Christianity in the U.S. His work focuses on the religious identity of evangelical youth and how this identity intersects with race, gender, and sexuality. Sam is originally from Dayton, Ohio.

Eugene Yu Ji is a PhD candidate in the Department of Psychology at the University of Chicago. His research interests and experiences include computational neuroscience and the intersections between cognitive science, computational linguistics, and linguistic anthropology. His current thesis research focuses on developing a new modeling methodology to study how language, cognition, and social and cultural processes interact with one another.

Emma Kahn is a MAPSS student on the Anthropology track. Her work orbits around New Urbanism, creative placemaking, public space imagination + renovation, and the longue durée of infrastructure. Prior to starting MAPSS, Emma was an immigration caseworker for detained asylum seekers in New Mexico for three years. She received her B.A. in Anthropology from Tufts University in 2018.

Kristen Kennefick is a current MAPSS (Master’s in Social Sciences) student at the University of Chicago, focusing in anthropology. Her research interests include women’s health, mental illness and disorder, and media ideology.

Lilly Lerer is an MD candidate at the Pritzker School of Medicine pursuing a career in psychiatry and physical medicine and rehabilitation.

Tony Hong Liu is a M.D. candidate at the University of Chicago Pritzker School of Medicine. He studied affect and non-representational theory under Betsy Olson at UNC Chapel Hill’s Department of Geography. His medical interests include psychiatry, ethics, medical humanism, and health equity. Most recently, Tony worked as a public radio and podcast producer for NPR’s Morning Edition and TED Radio Hour as well as The On Being Project.

Jenny Paul (she/her) is an MA student in the Divinity School at the University of Chicago. She studies critical theory, French and German Christian mysticisms, and comparative philosophical literature. She is particularly interested in contemporary radical left theory and insurgency as well as mystical Marxism. Some of her secondary research interests include horror films, madness in literature, and ontologies of ecstasy and suffering. Her overarching academic project is aimed at putting mystical philosophy and critical theory into conversation.

Evan Reynolds (he/him) is a PhD candidate in the Program for Writers at the University of Illinois at Chicago studying Poetry with a secondary concentration in Disability Studies. His approach to the study of mad literature in particular and disability literature in general synthesizes Marxist, Psychoanalytic and Foucauldian thought. His dissertation is a poetry manuscript which explores the abjection of schizophrenic experience.

Taimur Reza is a PhD candidate in the department of SALC, UChicago. He is interested in political theory in general and south Asian political thought in particular.

Nicholas Russell is an MA Candidate in Social Philosophy at Loyola University Chicago, where he is a scholastic in the Jesuit First Studies program. Nick’s research interests converge around critical theory, continental philosophy, and the philosophy of religion. His current research projects use continental philosophies to examine religious experiences of mysticism, celibacy, and sexuality.

Elizabeth Sanchez is a Chicanx first-year doctoral student at the University of Chicago’s Crown Family School of Social Work, Policy, and Practice. Elizabeth is passionate about the intersection of immigration policy, Latinx mental health, infant mental health, and undocumented immigrant family well-being. Elizabeth’s past experience includes the provision of culturally attuned early prevention/intervention therapeutic supports for predominantly Latinx undocumented families. Elizabeth also served as a federally appointed child advocate—that zealously championed for the best interests of unaccompanied immigrant children throughout their immigration proceedings. Her passion for non-traditional healing and Latinx critical approaches led her to proudly serve as a current board member of Programa Velasco, an organization that provides empowerment, mental health, and early prevention-intervention supports to Salvadoran young children, families, and women entrepreneurs. Elizabeth received her bachelor’s degree in Sociology and Chicanx/Latinx Studies from UC Irvine and obtained her master’s degree in Social Service Administration from the University of Chicago.

Esti Shapiro (they/she) is a designer, writer, and educator based in Chicago. Their academic and creative work engages the relationships between architecture, urbanism, and narratives of place, interrogating spatial manifestations of power. Esti’s current research interests include spatial histories of LGBTQ+ folks and utilizes queer theory to address concerns of futurity, precarity, marginalization, and belonging. Esti holds a BS in Architecture with a Concentration in Urbanism and Minor in Media, Culture, and Communication Studies and an M.Arch from Wentworth Institute of Technology and will complete an MA in Visual and Critical Studies at the School of the Art Institute of Chicago in May 2022.

Brianna Suslovic is completing the first year of her doctoral studies at the University of Chicago’s Crown Family School of Social Work, Policy, and Practice. She studies the intersection of medical and carceral institutions using an abolitionist lens, interrogating the presence of social workers in settings like mental health courts and police crisis teams.

Leif Turner (he/him) studies comparative literature, focusing on late nineteenth-century fiction, psychoanalysis, and queer theories of the political. Though currently a second year in the Master’s in Humanities program at the University of Chicago, Leif will be joining the department of Comparative Literature at the University of Minnesota in Fall 2022.

This is a hybrid event, and it is free and open to the public. Registration is required for both in-person and virtual participation. Please email us if you require any accommodations to enable your full participation.