Art, Irony, and Popular Culture: The Role of a Village in the Syrian Revolution 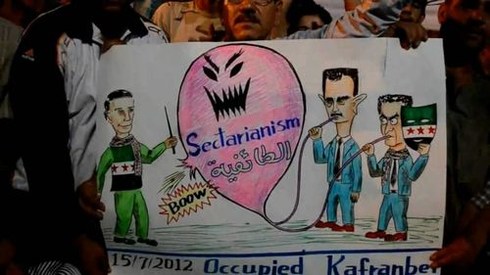 Please join us for an afternoon discussion with Syrian media experts Raed Fares and Razzan Ghazzawi. Light refreshments will be served.

Raed Fares is the man behind Kafranbel’s world famous banners, demonstrations, political cartoons, and silent films. He has chronicled events since the Syrian uprising’s inception in March 2011. Among the first in Kafranbel to demonstrate against the regime, the 41 year-old revolutionary has also organized protests in neighboring villages. Committed to peaceful resistance, Fares continued rebelling against tyranny even after the regime sent its army to attack his town. And he provided daily coverage on his YouTube channel of the battle “liberating” Kafranbel, as the regime retreated. He was eventually forced to leave home to avoid detention, joining others in the underground. Currently head of the media center in the city of Kafranbel, this is Raed’s first trip abroad since the uprising began.

Razan Ghazzawi began blogging under the alias Golaniya when Israel launched its war against Lebanon in 2006. Completing her master’s degree in Beirut, the Syrian blogger also wrote about racism experienced by Syrian workers at the time. Ghazzawi started blogging under her own name in 2008, calling along with many others for freedom of speech in Syria. When the revolution broke out in March 2011, Razan was among those providing updates on demonstrations. Twice she was detained in connection with her work with the Syrian Center for Media Freedom. On February 16, 2012 the Center was raided by regime security forces. Razan’s fellow bloggers, Hussein Ghrer and Hani Zetani, along with her boss, Mazen Darwish, have not been released. In 2012 she received a Front Line Defenders award.