Literature in a Time of Migration 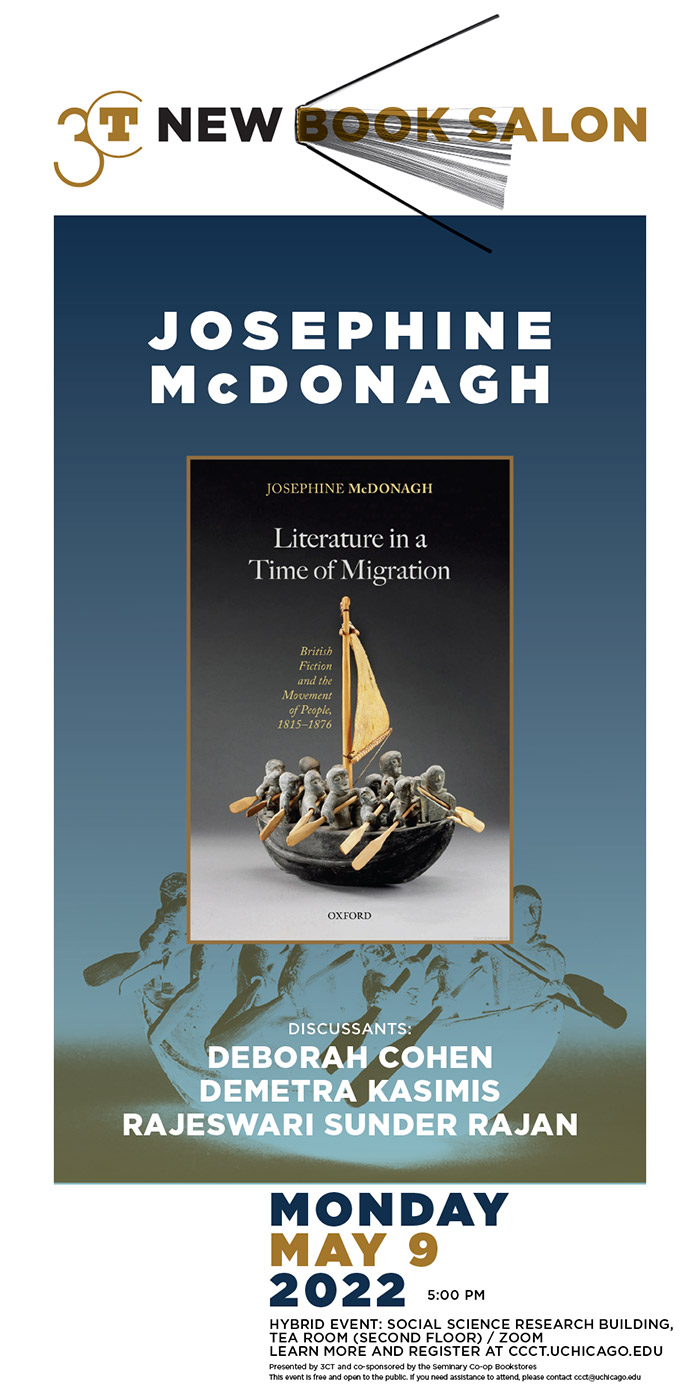 Josephine McDonagh’s new book, Literature in a Time of Migration (Oxford University Press, 2021), rethinks British fiction in the light of new practices of human mobility that reshaped the nineteenth-century world. Please join us for this New Book Salon, in which McDonagh will be joined in conversation by Rajeswari Sunder Rajan, Deborah Cohen, and 3CT fellow Demetra Kasimis.

Building on the growing critical engagement with globalization in literary studies, Literature in a Time of Migration confronts the paradox that at a time when transnational human movement occurred globally on an unprecedented scale, British fiction appeared to turn inward to tell stories of local places that valorized stability and rootedness. In contrast, this book reveals how literary works, from the end of the Napoleonic Wars to the advent of the New Imperialism, were active components of a culture of colonization and emigration. Fictional texts, as print commodities, were enmeshed in technologies of transport and communication, and innovations in literary form were spurred by the conditions and consequences of human movement.

Examining works by Scott, Charlotte Brontë, Dickens, and George Eliot, as well as popular contemporaries, Mary Russell Mitford, John Galt, and Thomas Martin Wheeler, this volume demonstrates how literary texts overlap with an agenda set in public discussions of colonial emigration that they also helped to shape. Debates about assisted emigration, ‘forced’ and ‘free’ migration, colonization, settlement, and the removal of native peoples, figure in fictions in complex ways. Read alongside writings by emigration theorists, practitioners, and enthusiasts for colonization, fictional texts reveal a powerful and sustained engagement with British migratory practices and their worldwide consequences. Literature in a Time of Migration is a timely reminder of the place and importance of migration within British cultural heritage.

Josephine McDonagh is the George M. Pullman Professor of English at the University of Chicago. She is currently the Director of the Nicholson Center for British Studies, the University’s focal point for the multidisciplinary study of all things to do with the British Isles and any of Britain’s former colonies. The Nicholson Center is devoted to supporting new work on these regions, and for the critical study of the history and legacies of colonialism. She is also one of the editors of the journal Modern Philology. Her work focuses on nineteenth-century British literature, especially in the contexts of colonialism, imperial expansion, and the migration of people across the world.

Rajeswari Sunder Rajan is the Sarah H. Schaffner Visiting Professor at the Nicolson Center.  She was formerly a Global Distinguished Professor in the Department of English, New York University. She is the author of Real and Imagined Women: Gender, Culture and Postcolonialism (1993), and The Scandal of the State: Women, Law, and Citizenship in Postcolonial India (2003).  Recent publications include the jointly edited volumes Commodities and Culture in the Colonial World (2017), and the Bloomsbury Handbook of Postcolonial Print Cultures (forthcoming).  She is currently finishing up a book on the late- twentieth century Indian novel in English, provisionally titled National Belonging: The Anglophone Novel in India after Midnight’s Children.

Demetra Kasimis is an assistant professor in the Department of Political Science at the University of Chicago, an associated faculty member of the Department of Classics, a board member of the Center for the Study of Gender and Sexuality, a faculty fellow of SIFK and the Chicago Center on Democracy, an associate editor of Polis: The Journal for the Study of Ancient Greek and Roman Thought, and a 3CT fellow. She writes and teaches on democratic theory with emphasis on the thought and politics of classical Greece and its contemporary receptions. Kasimis has been the recipient of fellowships from the NEH, ACLS, and Mellon and Fulbright Foundations.

Deborah Cohen is the Richard W. Leopold Professor of History and History Department Chair of Northwestern University. As a modern Europeanist historian, with specialties in Germany and Great Britain, she researches state and society, the public histories of private lives, and material culture. Cohen has written four books, which have received multiple prizes, and her new book Last Call At the Hotel Imperial: The Reporters Who Took on a World at War was published in March 2022. Cohen has been the recipient of fellowships from the Mellon Foundation, the National Humanities Center, the Cullman Center for Scholars and Writers, the American Council of Learned Societies, and the Guggenheim Memorial Foundation.