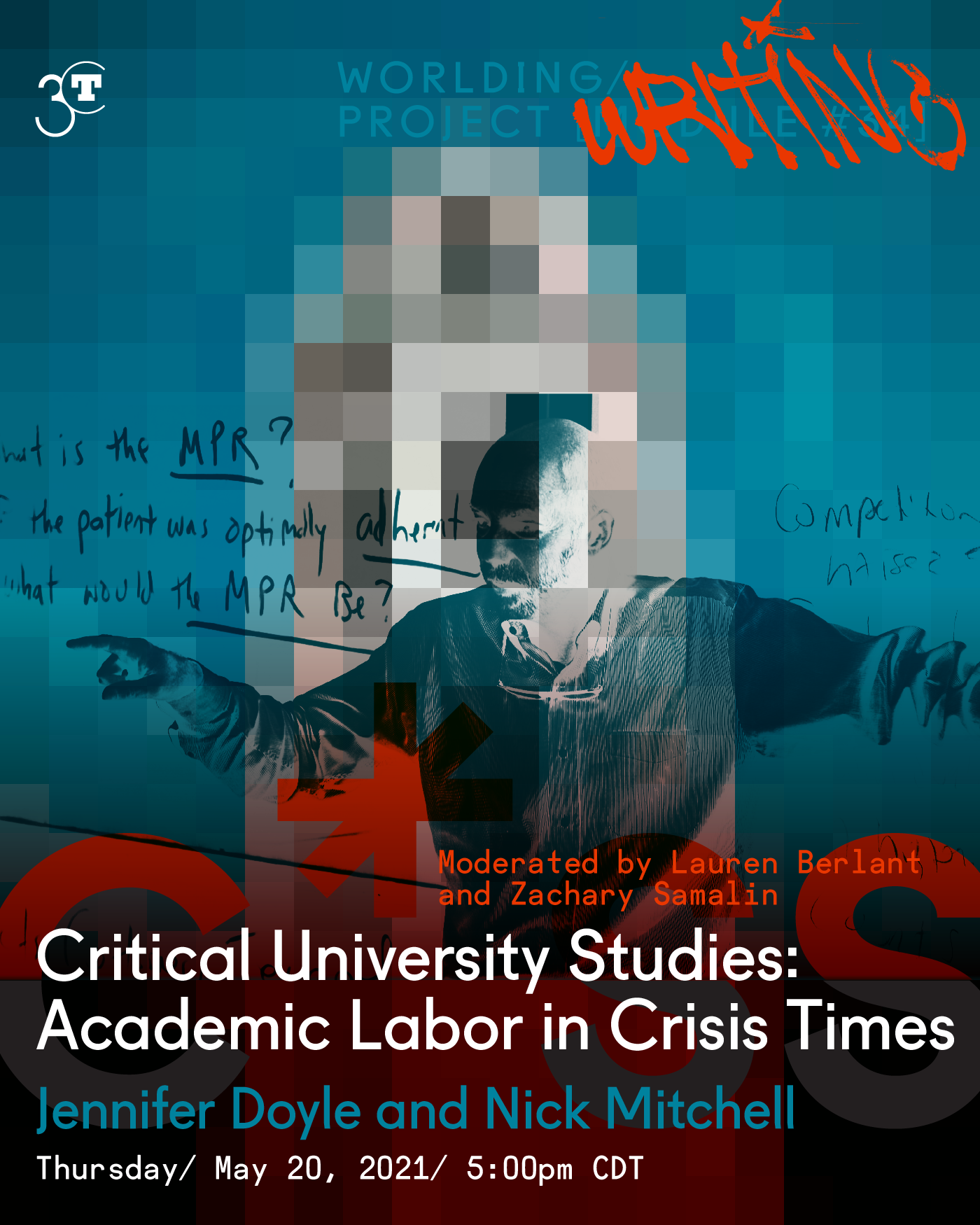 The faculty study group Critical University Studies (CUSS) is sponsoring two public panel discussions this Spring quarter. In this second event Nick Mitchell and Jennifer Doyle will discuss universities’ entanglement with various scenes of security: from campus police and sexual harassment to forms of life that haven’t yet entered the jurisprudential imaginary. Their previous abolitionist work on the securitization and exploitation of higher education is well known to many. Here, they will reflect on the work it takes to keep the effects of institutional betrayal from preventing us from taking on the work of effecting change, offering some notes on the use of cynicism as a grooming tactic. 3CT fellow Lauren Berlant and Zachary Samalin moderate the conversation.

Background: In the contemporary field called Critical University Studies, a debate is flourishing about what universities are for. This is a debate over how not to repeat the participation of higher ed in the racial, gendered, economic, and policing inequities of the past and present; a debate over how to use our resources to bring better knowledges and relations into being for the present and the future. There was never an inside or outside the university: this area of study keeps discovering entanglements of violence and desire in the orchestration of knowledge and the organization of labor.

Of course, many public and private higher ed institutions are also claiming that the university of the future must leave behind the 20th century model of the liberal arts education. This is a mixed blessing, often involving the devaluation of non-vocational training in the light of efficient credentialization. How can its laborers use this moment to transform the disciplines of discipline and the educational mission, wresting it away from one in which individuals bet on the university credential for their very lives, then sink or swim on their own?

One side of this debate is an abolitionist model, which revolts against reproducing the expropriation, exploitation, managerial fetishism and white/European elevation of abstraction central to 20th and 21st century Western higher education. This view counsels withdrawing faculty and student labor from the university insofar as it has been an arm of the security state and those sectors of capital that profit from student debt and student training in a docility that offers the degree, a professional class credential, as a weapon in an ongoing race and class antagonism. There was real desire for universities to produce and distribute transformative collective thinking, amid all of this. That real desire keeps us asking questions of it and ourselves.

The other register in the debate focuses on rethinking teaching, collaborating, and transfiguring the work of scholarship and world-building that shapes higher ed’s architectures and everyday activities. It wants to create new models of labor and value from where we are, in the mess of the present crisis that is staring universities down. How can students and faculty fight back against the austerity measures that put the humanities and interpretive sciences on the defensive, because their outcomes are not clearly or immediately convertible to reputation and other forms of economic and social capital? How can our institutions be incited no longer cynically to use the apprenticeship model to justify exploiting student labor? Is it possible to build a new world from within the world that is already waning?

Jennifer Doyle is the author of Campus Sex/Campus Security (Semiotext(e), 2015), Hold It Against Me: Difficulty and Emotion in Contemporary Art (2013), and Sex Objects: Art and the Dialectics of Desire (2006). She has published a number of articles about sexual harassment and Title IX administration, including an analysis of a 2014 Michigan State University report which cleared Larry Nassar.

Nick Mitchell (he/him/she/her) is Associate Professor in the Department of Feminist Studies and Core Faculty in the Program in Critical Race and Ethnic Studies at UC Santa Cruz. As a researcher, Mitchell is principally engaged the status with higher education in the US as a problem for historical and theoretical inquiry. Calling into question the presumption that knowledge production is the defining feature of the university, Mitchell’s work aims to rethink the contexts, contents, and political-economic foundations of higher education from the 19th century to the present. As a writer, Mitchell aims to make better sense of university life-worlds by developing scales, vocabularies, and categories to reframe and rethink its rhythms and textures. These research and writing efforts can be found in essays published in Feminist Studies, Critical Ethnic Studies, The New Inquiry, and Spectre, as well as in two forthcoming books: “Disciplinary Matters: Black Studies, Women’s Studies, and the (Neo)Liberal University” (under contract with Duke University Press) and “The University, in Theory: Essays on Institutionalized Knowledge.”

Presented by 3CT and co-sponsored by the Center for the Study of Race, Politics, and Culture.

This event is free and open to the public; registration is required. Live captioning will be provided. Please email us at ccct@uchicago.edu if you require any accommodations to enable your full participation.